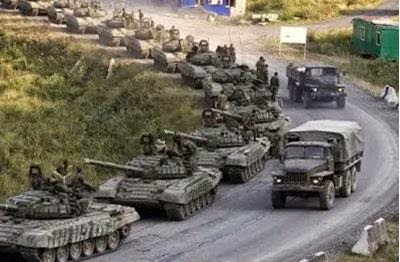 Find attached a pic of recently acquired T72 tanks by GEJ administration to tackle BH. The soldiers moral are so high now because these T72 tanks purchased from Ukraine are Anti-IED, Anti Missile and are indestructible unless shot by another tank.

They were purchased as part of the utilization of the 1Billion dollar loan and 77 were bought and are being distributed in the trouble area. Now boko haram are fleeing and they are now setting IED's everywhere but apparently they cant destroy the Tank.

Last week, BH loaded a Toyota Starlet and while passing like passengers, they ran into one of the tanks and made a huge hole on the ground and killed 5 soldiers but the soldiers inside the tank were not even scratched.

It is their massive IED attack where they plant IED and run away and while combing the area Major Umar was killed. A gallant Officer. But with these Undestructable tank, One soldier can confidently drive into BH Territory and cause havoc without a scratch.

I can confidently tell you that 6 BH Tanks have been destroyed by our troops in Yola. BH days are over, attach is a pix of 14 tanks deployed to Adamawa. I decided to share this pix after watching the massacre on the Bridge you posted yesterday

These tanks are all computerized and they use GPS to locate and shoot, that means if you feed it a beacon location on land it will destroy it, it is that accurate. The triggers are also computerized buttons.