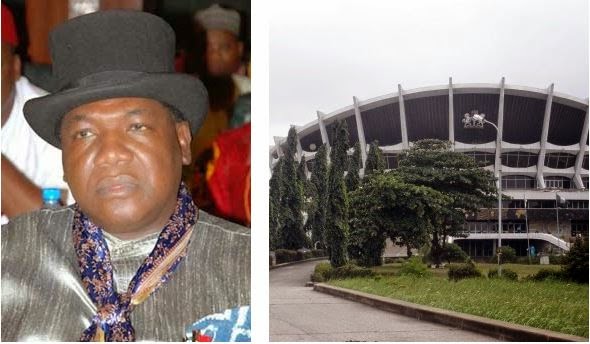 That is what Politicaleconomistng.com is exclusively reporting. Find report below...

Barely one year after Nigerians stopped him from turning the National Theatre into a hotel, the Minister of Culture and Tourism, Edem Duke, secretly jetted off the country to the United Arab Emirates, UAE, where he traded off the nation’s cultural pride to Mulk Holding, a diversified UAE-based conglomerate with interests in retail sector and other businesses.


The secret deal which was successfully shielded from the Nigerian media, in spite of a subsisting concessioning arrangement with the Bureau of Public Enterprises, BPE, was signed and sealed in December , 2014 between a delegation led by Duke, the General Manager of the National Theatre, Kabiru Yar’Adua and representatives of Mulk Holding, said to be ploughing the sum of $40 million (about N7.5 billion) counterpart fund into the project.

According to GulfAfrica Review, in its December 10, 2014 edition, Sharjah’s Mulk Holdings, a diversified UAE-based business conglomerate, “has announced its entry into the retail sector in West Africa through a $40m joint venture to develop Nigeria’s National Arts Theatre in Lagos into a duty-free shopping centre in partnership with the Suzanne Group.

“The interior of the National Theatre will be redesigned and renovated into a modern duty-free and retail shopping mall. The project will convert approximately 30,000m2 of the existing space in two 15,000m2 phases,” said Kabir Yaradua, CEO of the National theatre.

The National Arts Theatre was originally built for the Festival of Arts and Culture in 1977, and later underwent a controversial privatisation after 2001 under President Olusegun Obasanjo.
Fresh plans further anticipate leasing the land around the theatre in a 30-year concession.
Minister of Tourism, HE Edem Duke, noted: “As part of the continuous drive to promote culture and tourism, the federal government is making necessary arrangements to transform the land into a modern mixed-use commercial and business hub of global standards.”

Arif Hafiz, Managing Director of Suzanne Group, praised the “milestone contract” Mulk Holdings as “one of the major global business groups in the UAE”, while Shaji Ul Mulk, chairman, Mulk Holdings, elaborating on the details of the project, noted that is expected to be completed in 2016.
“Mulk Holdings is adopting aggressive strategies to expand its core business, involving serious investment into existing businesses and diversification into sustainable industries,” Ul Mulk added.
According to a report by audit firm Ernst&Young, Africa’s retail and consumer sector received about 17% of all foreign direct investment that came into the continent in 2013.

Mulk Holdings and its joint venture partners own and manage a group of 20 companies with a sector focus on construction and fit-out manufacturing, as well as diversified business interests in trading, commodities, real estate and energy, spread across 48 countries.

Based in Dubai, the Suzanne Group caters to duty free shopping outlets in international airports and seaports, and is a registered supplier of services to the offices of the United Nations.
Though the theatre had been a victim of public sector incompetence, its final descent into the ignoble hall of shame of failed public institutions started in 2001 when the Obasanjo civilian government served notice of its intent to privatize the monument. Converting a public institution into a successful private enterprise has never captured the fancy of Nigerians. Many of such previous attempts at privatization of public institutions have failed and the case of the National Theatre was not different. Between 2001 and now, the theatre has remained a mere ball for government ping-ponging. It is yet to be sold or concessioned, worst still the federal government which is the original owner of the facility is behaving as though it is the least of its worries: unserious.

A staff of the theatre told our correspondent that the employees are more confused than anybody. ”We don’t know our fate. Today we hear they want to privatize it and build a 5-star hotel here, tomorrow we hear a different story. This is confusing and it is affecting our morale and commitment because nobody, not even our senior staff can say categorically that this is the true situation of things.
“We believe the management of the theatre is doing this deliberately to give the impression that the theatre cannot function effectively if left in the hand of government. We believe it is a cheap way to arm-twist government to sell the national pride. But some of us have travelled far and wide and we have seen equivalent institutions in other countries being managed by the public sector and they are efficient”.
Political Economist investigation showed that the theatre has become a victim of power play orchestrated by the Tourism Minister, Edem Duke, in concert with the General Manager of the Theatre, Mallam Kabiru Yar’Adua both of whom, stakeholders allege, are intent on disposing of the national monument for peanuts. The Theatre, they argue, was set up by a decree just like the National Troupe and other parastatals of the Ministry of Tourism and they see no reason why it should be sold off on the whims of a minister and a manager. They cited the case of the United States where certain monuments are still held in custody of government.
For instance, the United States government enacted a law in 1846 to support and preserve the Smithsonian Institution and its 19 museums across the country. In UK, the Royal National Theatre and Royal Shakespeare Company are publicly funded theatre outlets and they are still relevant till this day. The case of the National Theatre cannot be an exception, they warned.
The National Theatre has been a victim of government policy flip-flop. The BPE commenced the concession transaction of the National Theatre in 2001 following the conclusion of World Bank-financed diagnostic study and Transaction Advisory service in line with international best practices. The first concession transaction in 2001 led to the pre-qualification of the following prospective concessionaires:

Jadeas Trust Consortium, and Lloyd Anderson Investment Limited.In January 2003, the pre-qualified concessionaires conducted data room and physical due diligence. The transaction was stalled, however, owing to the inability of the Ministry of Culture and Tourism to provide relevant documents such as Power of Attorney as well as building and floor plans of the National Theatre.
The BPE did another concession transaction of National Theatre in 2006. Eight Consortia responded when the Bureau advertised for Expressions of Interest. This led to the financial bid opening on May 17, 2007 where Infrastructica Consortium emerged as the Preferred Bidder with a bid price of ₦35, 560, 000,000 and Jadeas Trust Limited as the Reserved Bidder with an offer of ₦28, 902,948,593.23.
Following the approval of the results of the financial bid by the NCP, an offer letter was sent to the Preferred Bidder on May 18, 2007 and a timetable to complete the concession agreement by May 28, 2007 was drawn. Unfortunately, the Preferred Bidder, Infrastructica Consortium, failed to meet the terms of the offer, leading to the termination of the offer. The Reserved Bidder, Jadeas Trust, was thereafter invited for negotiation to pay for the enterprise.

However, the process to conclude the transaction with Jadeas Trust was stalled.
The NCP at its first meeting on January 22, 2013 approved the resumption of the concession transaction by the BPE with a view to bringing it to conclusion. The BPE has consequently invited the reserve bidder, Jadeas Trust Consortium with the offer of N28,902,948,593.23 to present a revised technical and financial proposal. The N28.9 billion bid offer, which is not yet concluded as it will form part of the renegotiation with Jedeas Trust, comprises both Entry fee and yearly lease fees to be paid over a 35-year period. This is different from the investment capital to be based on approved Post Concession Business Development Plan from which the Concessionaire is to recoup its investment and return the enterprise to the Government after 35 years in the event that the concession is not renewed.

The NCP, in line with its practice to carry along ministries whose enterprises are being privatized/concession, also approved that the BPE should invite the Honourable Minister of Tourism & Culture to participate in the NCP’s technical sub-committee that will evaluate the proposal of Jadeas Trust.

Jadeas Trust Consortium has submitted a revised Technical and Financial proposal to BPE. In accordance with NCP’s decision, the BPE has written the Ministry and the Management of National Theatre to send two nominees each to join the evaluation committee that will assess Jadeas Trust Consortium’s Technical and Financial proposal.

At the Federal Executive Council’s meeting (FEC) held on Wednesday June 26, 2013 an Inter-ministerial Cabinet Committee was set up to consider the parallel concession transactions being carried out by the BPE and the Ministry of Tourism, Culture and National Orientation.
With the new development being spearheaded secretly by the minister, it is not clear what has become of the earlier concessioning arrangement and the status of Jadeas Trust.