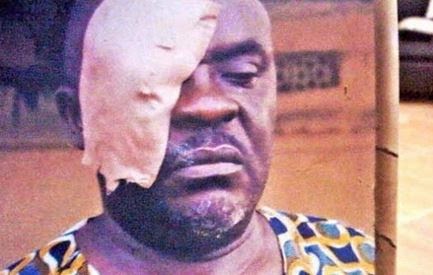 The police officer who complained of losing his sight after being attacked by a naval officer has gone blind. As­sistant Superintendent of Police (ASP) was attacked on the eye by the naval rating, identified as Warrant Officer Unaji Ene­jor on February 22 in the Kirikiri area of Lagos State.

The 50-year-old victim had suffered glaucoma on his left eye before the incident, and a punch from his attacker on his right eye dealt a big blow to his overall sight.

All efforts made by Mbilla to regain his failing sight proved abortive. He told Saturday Sun that he had visited many hospitals in Lagos in a quest for a cure for his battered eye.

Presently, the policeman, who was previously doing virtually everything on his own, including driving his car, has now turned vegetable, relying on his two wives for help. In her narration, the second wife told the Sun

“My husband and I were in my shop, when we suddenly heard a loud noise like a crash just outside my shop. We rushed out, only to find out that the pavement at my shop was hit by a vehicle. My hus­band told the driver of the vehicle to find a solution to what he had done, but the driver quickly identified himself as a na­val officer and told us to get out, boasting that we could not do nothing. My husband also identified himself as a police officer.

“The man wanted to escape, but my husband refused him, only for the na­val officer to forcefully hit my husband in the eye with the car key. My husband fell to the floor, screaming for help. At that point, the naval officer ran away but unfortunately for him, his car got stuck in a gutter. It was the sympathizers that were running after him that were able to stop him from escaping. Two other na­val men immediately came and wanted to help their colleague escape but the crowd overwhelmed them, and the assailant

was eventually taken to the Kirikiri Police Division. Later, the case was transferred to Panti, Yaba, where he was released on bail.”

“The police have written letters to the Navy. They sent two officers from the Navy to enquire about the incident. I told them what I knew about the matter and they promised to return to meet my hus­band, but we have not seen them since then. I believe they are hiding the naval officer from us. We demand justice,” she stated.

Speaking on the challenges they have been facing in the aftermath of the inci­dent, she said that life had been tough for them as their financial well has run dry and they now run from pillar to post to fend for the family.

“Since the incident, it has not been easy for me and my family. We have spent all we have on treatment; going for one test after other in different hospitals and eye check centres. My husband can’t do anything anymore as I have to be with him 24 hours to take care of his needs. We have spent over a million naira and I have sold almost all the valuables we have.

“He always feels pain and headache. We still buy drugs weekly. We want the Navy to produce the officer that attacked my husband so that he can share in our burden. Most importantly, we want justice to take its course but without further de­lay”, she lamented.

She also pleaded with well meaning Nigerians, authorities including the Lagos State government and NGOs to come to their aid financially and otherwise.

The victim, who hails from Ohafia Lo­cal Government Area in Abia State, is the only surviving child of his parents, with two wives and six children under his roof. Until his blindness, he was the breadwinner of his family.

Before he was rendered blind, the re­tirement plan, it was gathered, of the po­liceman who was a United Nations Peace Keeping ambassador was to establish a security outfit.