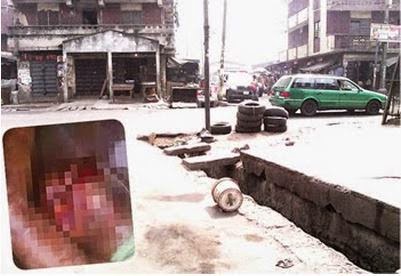 Five people have been killed after suspected cult members attacked residents of Ijora Bardia, in the Apapa Iganmu area of Lagos State. Those killed in the Monday attack were identified as Ramon Oladejo, Lateef Abdullahi, Yusuf, Rasheed and Alausa. Ramon, a meat seller in a market in the community was on his way to work on the fateful morning when he was shot dead.

The Oyo State indigene left behind a 27-year-old widow, Rasheedat, and four kids. Another victim, Lateef, a 30-year-old motorcyclist was to be appointed the chairman of the riders association when he was killed. Multiple sources said that the five victims were shot dead by hoodlums known as the Aliwo boys. The gang was said to be about 50 in number and carried sophisticated arms. A source, who pleaded anonymity said,
dffffffffffffffffffff

“On Monday morning, the Aliwo boys trooped out from across the bridge where they have their base and blocked the main road. They cannot be less than 50. Many of them had guns and opened fire on people on the road. Bullets hit 17 people actually, but only five people died. The others were seriously injured and quickly taken to different hospitals where they are receiving treatments.”

Among those in the gun-trotting crowd were men identified as Labanba, Oye, Songa, Okelemele, Asarailu, Ahmed Okada, Muliko, Last born, Kamoli and Omar. When our correspondent visited the area on Wednesday, there was still tension on some of the streets. Afolabi Street, in particular was still deserted. Two police patrol trucks were observed around Sule Lane while one was sighted around Akoshile junction, where the shootout reportedly occurred.

PUNCH Metro had reported on December 29, 2014 that two youths were attacked while sleeping on Sule Lane and shot dead, while several others were cut with machetes as many vehicles were vandalised. A resident, Feranmi Bolajoko, said the attack on Monday might not be unconnected with a supremacy battle among the motorcyclists in the area. He said,

“This may be the reason why after they shot Lati (Lateef), they also butchered him with cutlasses.

“After killing him, they snapped his corpse and started circulating the picture to show they had finished him off. Lati was supposed to be made the chairman of the tricycle riders after the death of the former leader.”

Our correspondent visited the home of another victim, Ramon, on Akoshile Street. His widow, Rasheedat, said,

“He was going to work that morning when he was caught in the crossfire on our junction.

“I trade in petty things, so he had been the one taking care of the family. I don’t know where to turn to.”

PUNCH Metro gathered that Ramon and his family had only recently relocated to the street. It was also learnt that the hoodlums stole all the valuables on him, including his mobile phone. Ramon’s eldest son, Jamiu, 13, asked for help for himself and his siblings ─ Selim, Yusuf and Kalid. A member of the Lagos State House of Assembly representing Apapa Iganmu, Muyiwa Jimoh, said the fracas was a supremacy battle for a park, which had been ongoing for some time. He said,

“We have however moved in security men to safeguard the lives and property of the people. I was also born there and can feel their pain and sorrow.”

A community leader, Chief Amuda Famuyiwa-Ojora, said the traditional ruler of the community, the Ojora of Ijora, Oba Fatai Ojora, had waded into the clashes several times, without any result. He added that some gangs from different parts of the state usually joined in the mayhem. He said,

“The Monday fight was sudden and unexpected. This clash is fuelled by thugs from Oshodi and Mushin. But we will make efforts to intervene again.”

“One Lateef Abdullahi, aged 30 years of Akorede area, Ijora was killed during the clash. Twenty-seven suspects were arrested. Investigations are ongoing to unravel the immediate and remote causes of the incident,” he added.