Boy attacked by dogs got infections at LASUTH – Indian hospital 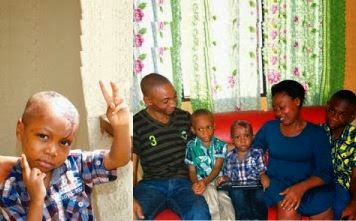 Available information has shown that four-year-old Abraham Omonigho, who was attacked by two German shepherd dogs in Igando area of Lagos State, in September 2014, was infected while at the Lagos State University Teaching Hospital, Ikeja.

According to Punch, this was said by the medical personnel at the Apollo Hospitals, Hyderabad, an Indian medical facility in Telegana State, where Omonigho was flown to late November, 2014, after his father, Odia, took him out of LASUTH.

After spending about two months at the Apollo Hospitals, Omonigho returned to Nigeria on Thursday. The treatment of the undisclosed infection was said to have lasted over one month.

Omonigho’s scalp had been covered up by the doctors but Odia said his son would return to India in June 2015, for a micro surgery.

Odia told Punch that,the Indian doctors thrashed the medical report LASUTH issued to them, which he said was termed as “mere paper.”

He said, “They said the report did not give them any information and couldn’t have been written by a doctor. They said it was good I quickly brought my son because his head was getting rotten and had been infected while at the hospital. The doctors told me they could not start with the surgery because they had to treat the infections first.

“You remember I cried out that my son’s head smelled, but the LASUTH people said it was granulation. I had always suspected things were wrong because at LASUTH, the nurses would open his head for dressing at 6am and leave it open for the doctors, who would not show up till 12pm. And when they did, they would ask the nurses to close it up. I remembered that no doctor showed up for two weeks during a particular time. That was when I got mad because his condition was becoming critical.

“But in India, they dressed his wound three times a day, and at least five special senior doctors attended to him every day.”

Our correspondent was shown a medical document of the hospital which confirmed that Omonigho’s head was infected.

“Dr. Durga Prassad, consultant paediatrician, was consulted for evaluation of medical problems. He (Omonigho) was diagnosed as a case of infected raw area over scalp.”

grafting to temporarily cover up the wound before the major operation would be done after his return to India in June.