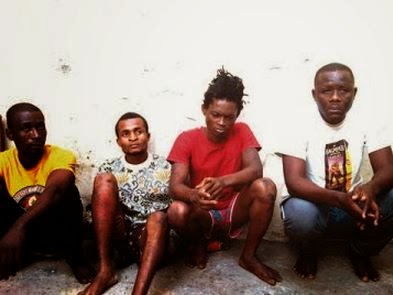 Four suspected car snatchers, who are now in the custody of the Lagos State Police Command, have explained how they snatched expensive vehicles in different areas of the state and sold them to buyers in Cotonou, Benin Republic.The suspects are Raoul Dedavi, Bright Ekeocha, Aziza Akobu and Adebayo Peter.

According to the police, Dedavi, a Beninoise car dealer who is based in Cotonou, is one of the the alleged receivers of the vehicles stolen by the gang.

Our correspondent learnt that information had reached the Commissioner of Police, Cornelius Aderanti, about the gang’s activities, and the Special Anti-Robbery Squad Commander, SP Abba Kyari, was directed to apprehend the gang members.

sponsored post
The suspects, except Dedavi, were arrested on January 5 at about 5pm in the Ojodu Berger area of Lagos.

The suspects were said to have confessed that they delivered the stolen vehicles to Dedavi in Cotonou, who allegedly sold them and shared the money. A few days later, the SARS reportedly apprehended Dedavi from his hideout in Cotonou, and also recovered a stolen Toyota Venza at the scene.

Dedavi added that he had worked with different gangs to steal cars in Lagos, and sell them in Cotonou since 2012.

“The deal is that they steal and bring the vehicles, while I sell and give them their share. I don’t sell such vehicles to Nigerians. I sell them to other West African countries. In 2013, I got six stolen vehicles from Lagos. In 2014, I got three. It was Peter (Adebayo) that I knew first among this gang. He came to buy second-hand clothes in my place.

“He told me the gang had a stolen Toyota Venza to sell and they brought it. I gave them N1.5m. my plan was to sell it for N2m or more. I did not know that the police were on the trail of that car. They spent about five days in my area, monitoring me before they were able to arrest me. I went into all this because of greed. I am very repentant now.”

Ekeocha, 25, from Owerri North, Imo State, said he disguised as a buyer while Akobu disguised as a technician during which they stole the Toyota Venza from their victim.

“Apart from Dedavi, there are other receivers of stolen vehicles which our gang used. When we stole one Lexus jeep and sold it, I made about N200,000. I pretended to be a buyer while Aziza (Akobu) pretended to be a technician and I went to our victim’s sales office because he was a car dealer too.

“When he brought out the vehicle for us to test-drive, we fled with it. The vehicle was stolen on December 18, 2014, and it was with us till December 29 when we then took it to Alhaji Cotonou (Dedavi).”

Akobu, 23, from Orlu, Imo State and 38-year-old Peter from Modakeke, Osun State, added that they were expecting N300,000 each as their share before the police rounded them up.

The Lagos State Police spokesperson, DSP Kenneth Nwosu, confirmed the arrest, adding that investigation continued on the matter at the SARS.

“The owner of the Toyota Venza is one Thomas Nwaonicha, who is a car dealer at Kilometer 52, Lagos-Ibadan Expresssway. He initially reported the matter at the Area H Command, Ogudu.The police were able to locate the suspects, who have also confessed to the crime. The case is under investigation at the SARS, Ikeja.”