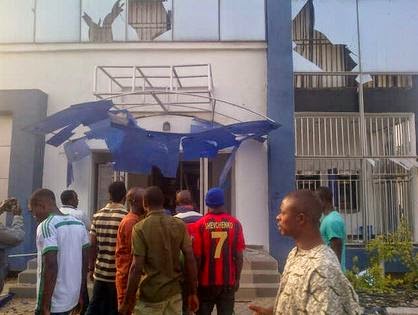 
As at yesterday, reports said that 18 persons were killed by the bullets of the robbers, who carried out the operation commando style.

Fact finding visit to the town by Vanguard, yesterday, indicated that five policemen were shot on their arrival at the two of the banks, while three others were shot at the police station, which was earlier raided by the bandits.

Reports had it that a former Chairman of the National Union of Road Transport Workers, NURTW, Ezekiel Ile-Ola Gold, was among the casualties. He was said to have been shot on the stomach and died instantly.

This is coming as both commercial and business activities remained completely paralysed in the ancient town.All the banks in the town shut their doors to customers as a result of the robbery incident.

The three banks that were robbed by about 15 armed robbers are located at Jubilee area and a walking distance from each other.

The police station was riddled with bullets, while all the shops located around the three banks had bullet holes on their walls and the iron doors.

Vanguard learned that the robbers came in two golf vehicles and a bus wearing MOPOL uniform.Some of those killed include school children, who were reportedly heading home and were caught in the sporadic shooting of the robbers.

Eyewitness account said that the robbers operated as if they were in a war front.

According a source, the robbers must have done their home work before the operation as all the major roads were strategically manned by them to wade off any security intervention that will halt their operation.

A source said a school boy and his father who went to pick him from school were both shot dead by the robbers.

Others were shot outside the banks at Idi-mango, Okegbede police station, Ugbe area, Iboropa and Akunu area of the ancient town.

A prophet said to be conducting a spiritual bath for a member of his church were both reportedly shot dead according to an unconfirmed source.

Corpses of the policemen and others according to sources have been deposited at the general hospital in Ikare.At press time, the image-maker of the state police Command Wole Ogodo was still in Ikare on a fact finding tour.