Lagos politician survives his after car explodes while driving [PHOTO] 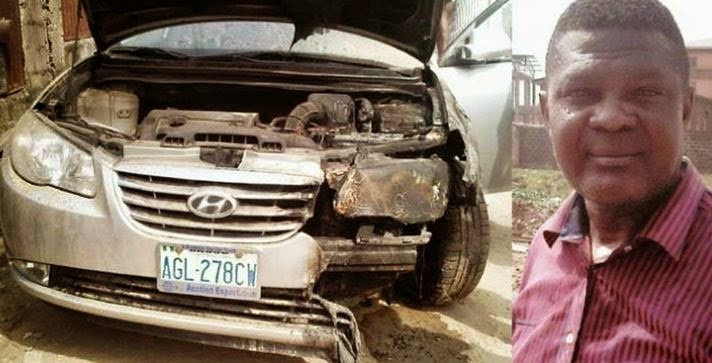 Alhaji Simbat Popoola Lateef is grateful to God for sparing his life. And he sure has enough cause to. The politician’s car recently exploded while he was driving the vehicle.

Expectedly, the blast damaged the new car. But quite incredibly, the Lagos politician was unhurt! He said he would remain eternally indebted to God for keeping him alive in spite of the blast that shattered his car.

The incident happened around 11.30pm on January 18, 2015 on God in Action Avenue, Wilmer Quarters, in Ajeromi /Ifelodun Local Government Area of Lagos State. After unwinding with his friends around his quarters, Lateef said he was driving home when the engine of his Hyundai car caught fire. He said he managed to escape from the burning car and shouted for help from neighbours who were probably already asleep at that hour.


He reported the ugly development to a nearby police station, and the police had commenced investigation to unravel exactly what led to the fire outbreak in the car.

He narrated to Sun

“I was the Supervisor for Environment in Ajeromi LGA, but I am presently the chairmanship aspirant under APC in this our LGA. Yesterday, I went somewhere called Agausa in Ajegunle Area, which is not too far from my house to relax. I left that place around 11.30pm, and as I drove for about five minutes heading to my house, suddenly, there was an explosion on my car.

“The engine by the side of the front left tyre suddenly exploded. To me, I suspected that somebody had secretly planted an explosive device inside my vehicle to terminate me. When I heard the sound, I jumped out of my car and I shouted for people to come out and assist me. I thank God for their response because they were able to put out the fire. Meanwhile, the fire had already damaged some part of the vehicle. All the same, I thank God for my life because it is not really the vehicle that got burnt that matter to me; it is my life.

“To my surprise, when we eventually quenched the fire, the vehicle was still working and the car’s air-condition was still on. I went to the police station to make a report and they came to the scene. They are still investigating the matter.

“This is a political campaign era and desperate politicians can go to any length to clear people off their way for the sake of occupying public offices. To me, I thought we have passed that era where we would be assassinating one another because of politics. By now, we should be playing advanced politics and true democracy just as it is obtainable in most of the developed countries.

“The electorate should be allowed to freely choose candidates of their choice, according to the aspirants’ credibility, ideology and party manifesto presented to them during campaign. It is not a do or die thing.”

The police could not comment on the situation at the time of filing this report. The reporter was told that forensic analysis and further investigation would give a clear explanation on what led to the incident.

The aspirant urged the police to ensure that the matter is thoroughly investigated, noting that if in the end someone is linked with the incident, the authorities handling the matter should not hesitate in bringing the culprit to book.

According to him, his survival was a miracle that he would live to share in his lifetime. He told our correspondent that he still unable to comprehend why anybody would be plotting his death when he had no evil plan for anyone.