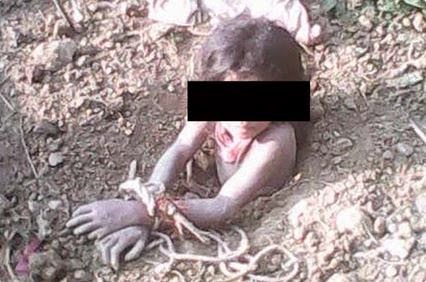 A man has been arrested in Tripura for trying to bury his 10-year-old daughter alive in the backyard of his home. The incident happened at a village close to the India-Bangladesh border, and police sources say the reason behind the incident was the man's dislike for the girl child.

The man, Abul Hussein, dug a pit in his backyard while his wife was out. He then put his daughter in the pit, hands tied, mouth taped and filled earth upto her chest level. Realising that his wife had returned home, Abul placed a bamboo-drum over his daughter's head, intending to bury her later.

But after the wife grew suspicious and raised an alarm, the girl was discovered by neighbours who beat up the man and called the police. Abul has been booked under charge of attempt-to-murder. Watch the video inside... (Content in this video could be disturbing for viewers)