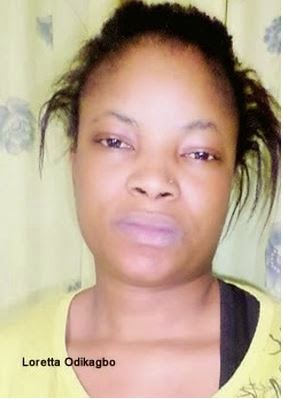 A romantic affair turned tragic after a woman from Rivers State reportedly killed her lover she met on Badoo, a social networking platform.

The woman, Loretta Odikagbo, 26, a student of Rivers State Polytechnic, met the victim, Charles Bankole Orisanya in 2014 and after a few months of online dating, they began to see each other physically, Tribune reports.

Orisanya worked with Halliburton in Rivers State prior to his death, and had reportedly promised to spoil Odikagbo with lots of money. However, she became unhappy during the course of their relationship, as Orisanya was not disbursing as much money as promised.

“When I met him, it was all promises upon promises. Along the line, the sex was going on and the money was not coming. He would give me N10,000, N15,000 but that was not what I expected from him. Also when we first met, to me, he was a single man but along the line, I discovered he was married.

We talked about it but he didn’t want the affair to end. He said that it would not be a problem and he could handle it. But I only continued with him because I was waiting for the promises to be fulfilled. I was not interested in marriage to him. We had a bit of misunderstanding concerning money and our relationship. I asked my friend who is also my in-law to help me so that I could get the money forcefully from Bankole,” she said.

On one night, when Orisanya invited her to his home, she also sneaked in two men, who would help carry out her plan to forcefully obtain the money.

Odikagbo, along with her two accomplices, are said to have attacked Orisanya shortly after he woke up from sleep. They then reportedly forced him to reveal his ATM pin number and afterwards, they tied him up with a rope and masking tape. She is said to have covered her lover’s his head with a polythene bag after taping his mouth, and subsequently sat on his head.

Afterwards, they stole his phone, laptop, and other belongings, then proceeded to visit the ATM and withdrew N120,000.

Odikagbo has denied knowledge of his death. She told police “I didn’t have the intention of dating him anymore; I just wanted to move on. I only knew about Bankole’s death when I was arrested.”#