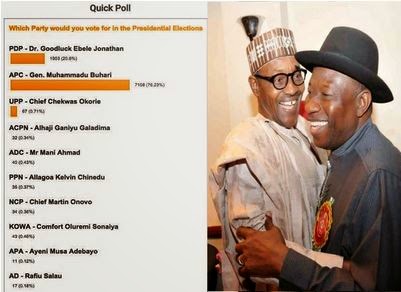 Buhari’s lead in the poll was despite the president’s shelling out of N5 million per daily showing of his sponsored documentary against Buhari that was being repeatedly shown on AIT stations across Nigeria, and online.

Earlier on Tuesday, SaharaReporters published a screenshot of the poll, which at that time showed Buhari well ahead by over 76%.

As the day wore on, the poll saw Buhari’s lead rise to 79%. It was then swiftly taken down, AIT replacing the page with a claim that the page was “under maintenance.”

In an effort to provide a rebuttal to a SaharaReporters poll showing Mr. Jonathan being handsomely defeated by General Buhari, Omokri manipulated a poll he had set up, and then hurriedly shut it down with Jonathan ahead of Buhari by 1%.

AIT did not say whether its poll page would return after its ‘maintenance’, but some users had noted earlier that the TV station was allowing multiple voting for President Jonathan.

That was subsequently corrected, a fact that was also noted by users, following which Buhari again regained the lead. AIT then suddenly went into ‘maintenance’.