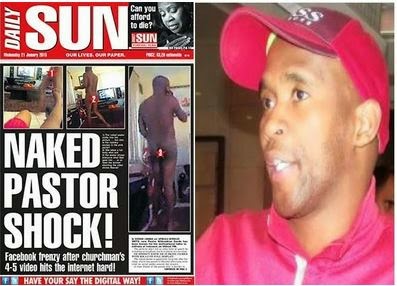 Until now, Pastor Sithembiso Zondo a South African has been known for his motivational talks to millions of listeners on their local radio station. However, this pictures don’t tell what kind of speech he is making on his phone, but he is clearly very involved and doesn't know he is being filmed!

The naked pastor is apparently lying low after the video, which was posted on Monday afternoon, went viral on social media around the country. A close friend of the pastor told Daily Sun that Sithembiso is on a 21-day fasting prayer session.


The source also said as far as he knows, the pastor’s wife has also left the house. In the video the pastor is seen walking up and down waving his hand around. He also touches himself casually. The legs of a woman in pink clothing are seen at the bottom of the shot. The pastor is completely naked. He is famous for his motivational talks on Ukhozi FM’s Breakfast Show on Tuesdays.