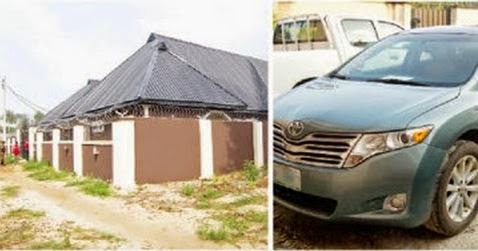 Uwujaren said the EFCC discovered that the suspects had used the proceeds to fund some projects, including a hotel, among others.He said,

“The EFCC has so far confiscated the following property, which are proceeds of the crime from the suspects; one uncompleted 59-room self-contain hostel, a twin bungalow in Oghara, Delta State, one uncompleted hotel project, one bungalow with a swimming pool in Ughelli and a bungalow in Agbaro.

“The trio are part of a syndicate arrested over allegations of conspiracy, Internet scam and stealing from one of the new generation banks to the tune of N806, 208,000. Forty others are still at large.
“The theft was perpetrated through a system glitch linked to the fraudsters, in which the bank suffered a huge loss of more than N806m.”

Uwujaren said,
“It was discovered that while many of the transactions involved were failed transactions, the amounts involved were not reversed, and all the customers were seen to have withdrawn the cash amounting to the sum on each day it happened.

“The suspects will be arraigned in court as soon as investigations are completed.”