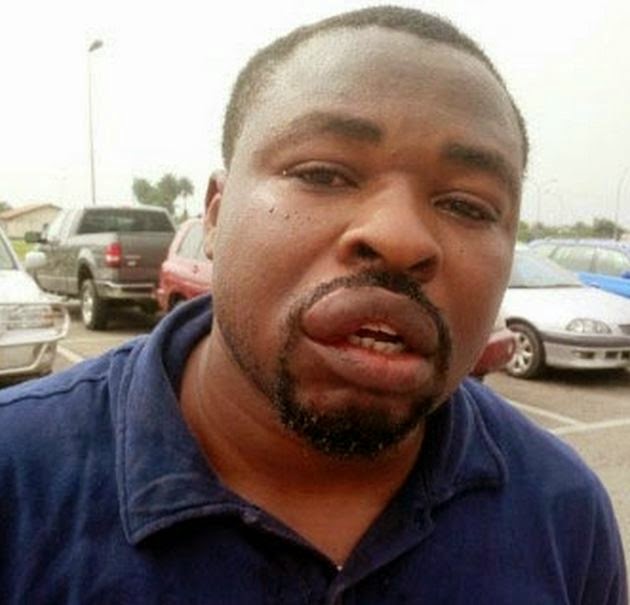 A Warri-based businessman, Mr. Larry Otu, has called for investigation and justice into the brutality allegedly meted out on him by men of the Nigerian Air Force at the Osubi Airstrip, Warri, where security was beefed up over Dame Patience Jonathan’s visit to Delta State, yesterday.

Narrating his ordeal to Vanguard, Otu, Chief Executive Officer of LYM Consult, said he was at the airstrip to receive his technical partners from Canada when men from the Warri Air Force Unit stationed at the facility attacked him.He said:

“It happened at about 9am, when our foreign partners arrived the airport and I was there to clear them at the Immigration desk. I drove to the gates to face interrogation from the Air Force men.

“One asked if I knew the President’s wife was coming today. I said yes, but that I have come to pick my foreign partners. He asked what I do for a living; I said I own the company being visited by our technical partners and he said

“He said okay, find me something. I said I cannot give you anything. So he ordered me to reverse my car and leave. He said I cannot drive in.

“I reversed my car, drove back to the main road and was trekking down to go in when a team of the force men, numbering about eight, pounced on me.”

Otu said his attackers dragged him from there to a point behind their caravan office at the airport and continued the beating, kicking, punching and hitting with their guns, adding it took the intervention of his manager who approached one of the officers before the assault was halted.

He said:
“It turned out that my manager knew one of the Air Force officers at the airport. He ran in to tell him that it was his company’s chairman that was being manhandling.

“That was when the officer came and ordered them to stop and let me go. But before I was left with a battered, bloodied face, N200,000 was taken from my pocket by one of them.”

The victim called on relevant authorities to ensure justice by bringing the culprits to book.
He said:
“I know the man who started it all and I know the one that took N200,000 from my pocket. We cannot continue to live in this kind of country. Justice must be done.”

When contacted, Commanding Officer at the 61 NAF Detachment of the Nigerian Air Force, Warri, Air Commodore, A. D. Dudusola, whose men assaulted the victim, said:

“I was not present when it happened, but they said he was rude.

“Why must it be only him? That is the question that comes to mind. Others came to the airport, identified themselves properly and were allowed in.

“Nobody was touched, so he must have been rude.

“My brother, it is better to face other challenges than to face the worry that somebody came to the airport and blast himself, because it is not always written in somebody’s face. That is the truth.

“We can apologize to him later, but we had to do our job first so that somebody will not create problem for us.”