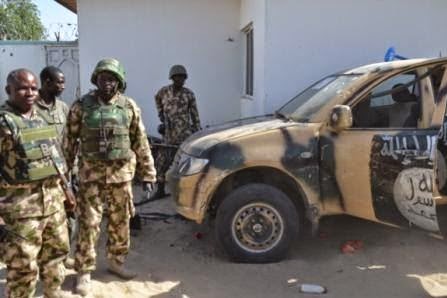 According to ThisDay Live, The Cameronian army had apprehended these fighters and are insisting on trying them, but France is against this idea.

A Nigerian military insider told reporters that the arrest of these Europeans have caused tensions between France and one of her Francophone allies in the sub-region following the shocking discovery that some French citizens are staunch members of the sect, a throwback to their membership of the terror group, Islamic State in Iraq and Syria (ISIS).

Findings suggest that France is angry at her former colony for not giving up on the idea of trying them in Africa and wants the French men handed over to the French authorities.

French Foreign Minister, Mr. Lauren Fabuci had ordered for the transfer of the suspects into French hands.

This has angered the Cameroonian authorities, who are dumbfounded by the manner in which France had demanded the release of its nationals.

A Cameroonian minister was quoted to have said: “Mr. Lauren Fabuci, the French Foreign Minister, has ordered Cameroun to release immediately eight Europeans captured by our security men, for being part of Boko Haram terrorists.

“Mr. Fabuci demanded their immediate handover to France so that they can prosecute the terrorists on French soil, ignoring our sovereignty and independence.

“The French are acting as if Cameroun is their errand boy that they can order around and ignore the fact that we have our own laws with which we can try the terrorists.”

The latest revelation has lent credence to strong suspicions in the Nigerian intelligence community that Boko Haram has strong foreign backing.

Nigeria has not revealed her position and it seems the West African giant is just going to back away from this one.

Director of Defence Information, Major-General Chris Olukolade, said that the matter was for France and her former colony to resolve and not ours.

“All I can tell you is that the matter is for Cameronian and French authorities to settle,” Olukolade stated.

One top military source in Nigeria has however revealed that the military had known of boko haram’s foreign collaboration.

He said that foreign soldiers for the sect include, Chadians, Arabs, Malians and other Islamists who have joined the sect.

“Now we have seen evidence of French and European participation. This is one major indication that Boko Haram has very active and sophisticated foreign backing. I advise that the African Union should take this up.

“France is trying to silence the Cameroonians but Africa must rise to the occasion and take this findings seriously. They must not keep quiet,” the military source said.

The Nigerian army has however continued its current onslaught to get rid of the sect before the national elections.

With the help of the Nigerian Air Force, the military’s advance into Boko Haram held areas have been succesful.

This information is coming after sources close to the military revealed that the boundary town of Baga and to some extent Bama are close to being liberated, and the army are just carrying out mop up in some areas.

Major General Olukolade had yesterday said: “A concerted air campaign by the Nigerian Air Force is ongoing in furtherance of the mission to clear terrorists from all their enclaves.

“The air strikes which today (yesterday) targeted the training camps and logistics dumps of the terrorists in Sambisa forest and parts of Gwoza have been highly successful as it achieved the aim with required precision.

“The death of a large number of terrorists has been recorded, while many others are also scampering all over the forest and out of the struck bases. Details of casualty will be determined in subsequent phases of the operation.”

Olukolade had revealed that these recent strikes to strategic boko haram would continue.

This recent resurgence of the army has been buoyed by the advance of the Chadian army who recently liberated Dikwa.

One Bababura Diwa, who lives in the town said that Chadians came from Gamboru with heavy artillery power overpowered a group of militants at Lomani village, 15 kilometres from Dikwa.

“When they came into Dikwa, there was intense fighting but at last they subdued the Boko Haram fighters,” he added.

“They killed many of them, including Abu Ashshe, their commander, who was notorious for seizing cattle in the area.

“I used the opportunity provided by the presence of the Chadian troops to leave the town. I was afraid to leave when Boko Haram took over the town for fear of being branded a traitor and killed,” he said.

The Chadians are part of a four-country coalition mounting a regional fight-back against the Islamists.