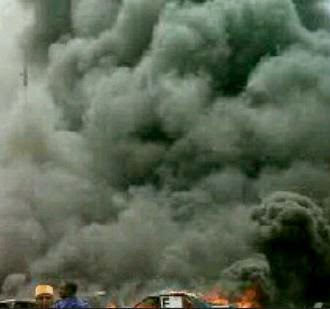 About 17 people were killed, Thursday, when a twin blast hit two motor parks along Bauchi Road in Jos, the Plateau State capital.

The blasts were said to have occurred at about 6pm when residents were returning to their houses during an evening rain.

The bombers were said to have taken advantage of the rain to hit their targets. Information on the attack is still sketchy and number of casualty cannot be confirmed yet.

Vanguard, however, quoted a resident of the area, Umar Awwal, as saying the explosives were thrown from moving vehicles by the bombers, who took advantage of the heavy downpour. He said that the attack claimed many lives and left several others seriously injured.

The North Central Zone Coordinator of National Emergency Management Agency (NEMA), Mohammed Abdulsalami could not give details as he said the agency was working to rescue the survivors.

Media Officer of the Special Task Force (STF) Capt Ikedichi Iweha told Vanguard that his men were still busy “taking care of the aftermath” of the blasts to have authoritative figures.