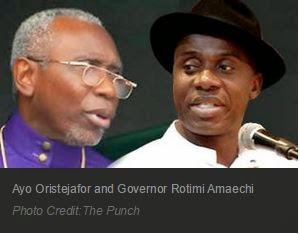 According to Sahara Reporters,

More facts appear to be emerging on the allegation by Rivers State Governor, Rotimi Amaechi, that President Goodluck Jonathan gave pastors across the country N6bn to vote against the Presidential candidate of the All Progressives Congress, Maj-Gen. Muhammadu Buhari (retd.), in the presidential election.

A Borno-based Pastor, Kallamu Musa-Dikwa, said on Thursday that the money that was given to pastors by the President was actually N7bn and not N6bn as alleged by Amaechi, who doubles as the Director-General of the APC Presidential Campaign Organisation.

Amaechi had alleged that unnamed leaders of the Peoples Democratic Party paid N6bn to Christian clerics to campaign against Buhari and the APC.

The governor’s allegation caused a stir among the Christian clerics, with the Pentecostal Fellowship of Nigeria and the Northern State Christian Elders Forum asking Amaechi to name the church leaders, who collected the huge bribe.

But Musa-Dikwa, who is the Executive Director of the Voice of Northern Christian Movement, told journalists in Kaduna on Thursday that the said money was channelled through the Christian Association of Nigeria.

He said the CAN got the said money (N7bn) on January 26, 2015 and disbursed N3m to each State Chairmen of the CAN across the country.

Musa-Dikwa, who was an Associate Pastor with the E. Y. N. Church, Farm Centre, Dikwa Road, Maiduguri, Borno State, under Rev. Emmanuel Kwajihe between 2002 and 2004, said the CAN had started threatening Christians in the state (Borno) that they must re-elect Jonathan in the rescheduled election.

He said, “It was N7bn that was given to the CAN leadership by President Goodluck Jonathan. They (CAN) later disbursed N3m to the State Chairmen of the CAN.

“Actually, President Jonathan is using CAN President, and it was the CAN President who collected the monies and shared N3m to the CAN executives in each state.

“And some Pentecostal Bishops also collected their share. Actually, the money is not N6bn, it is N7bn. This is what I know. One of the CAN officials from Abuja told me that they have collected the money. The corruption in CAN is terrible. They are corrupting the body of Christ because of money.

“They are now threatening Christians in Borno State that they will deal with anybody, who refuses to vote for Jonathan. And the CAN officials are now campaigning that if Buhari emerges President, he will Islamise Nigeria; and that Osinbajo collected monies from Islamic world; and that the same Osinbajo will resign soon after Buhari wins to give way for Tinubu to emerge Vice President.”

Musa-Dikwa named some high-profile clerics, who had benefitted from the controversial largesse to actualise the re-election bid of Jonathan.

CAN however strongly denied the allegation.


Speaking on behalf of CAN, Mr. Sunday Oibe, Public Relation Officer, PRO of Northern CAN, said:

“The allegation is a complete lie and just one of the many evil plots to dent the image of the leadership of CAN.

It is also to rubbish its integrity and make it morally incapable of leading Nigerian Christendom in this trying times. There was no way that Pastor Ayo Oristejiafor would collect a kobo on behalf of CAN and start sharing it out like a man sharing a booty.
“This man, Dikwa you are talking about is totally unknown in the CAN cycle and I am just hearing his name and that of his organization for the first time. How comes he could be privy to such an arrangement if it really existed. Please go and make your findings very well. It is a shame that anyone would cast such mean allegation, without giving a shred of evidence, just to fulfill a political agenda, at the cost of our ecumenism.
It is all to silent the voice of Pastor Ayo against the tyranny that Christians suffer in the north east and other parts of northern Nigeria. For the first time our oppressors findsCAN speaking up for its members, and they must do everything to frustrate Pastor Ayo. The kingdom of evil shall, again fail flat on the feet of Jesus,”