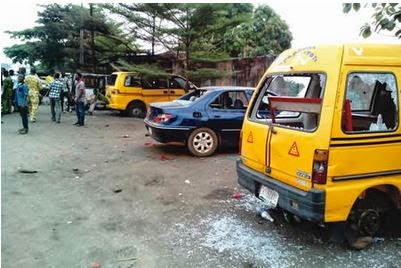 Pandemonium broke out in Mosafejo, Oshodi-Isale area of Lagos State, after rival groups said to be members of the National Union of Road Transport Workers, clashed on Tuesday and early Wednesday.

Four people were reportedly killed, while several others were injured in the fracas which was stopped after the intervention of anti-riot security personnel.

No fewer than 15 commercial buses were set on fire, while 12 others were vandalised.

Makeshift stalls in the Mosafejo Motor Park were also torched, leaving traders in the park mourning their losses.

When PUNCH visited the scene of the incident on Wednesday, the atmosphere was still tense as men of the Nigeria Police Force and some soldiers were observed patrolling the area.

The motor park, usually filled with vehicles, was deserted as the police armoured tanks and patrol vans took over the space.

Broken bottles, shards of glass from shattered windscreens and pebbles, said to have been deployed by some of the hoodlums during the fight, littered the road.

Bloodstains dotted the Oshodi Roundabout, where a man was said to have been shot dead and his corpse taken away by the police.

A vehicle was still burning as of 1pm. Around the same time, a police van manned by police officers was observed taking some teenagers away.

The source, who spoke on condition of anonymity, said the fight started after the police ordered that there should be a stop in hemp smoking in the motor park.

The move was said to have been supported by the Big London boys, which brought them in conflict with the Railway and Under-bridge gangs who saw them as an ally of the police.

The source, a woman, said, “That was the beginning of the fight. The Railway boys and the Under-bridge boys usually conspire to wage war against the Big London boys which also had Olu Omo as a leading member.

“Yesterday (Tuesday), the allied gangs struck again and killed four people. One particularly was popular here and we call him Afari. A man was shot in the eye, another in the hand and leg. Several others are in critical conditions in hospitals.”

Another witness, who did not identify herself, said one Idris was cut with machete in the buttocks, leg and hand. "No one knows if he will survive the attack because his condition is critical," she said.

Police Public Relations Officer, Kenneth Nwosu, while confirming the incident, said one person was killed, adding that the police recovered some weapons from the hoodlums.

He said, “There was an attempt to breach the peace at Oshodi. The hoodlums, who were rival members of the NURTW, engaged in a fight of supremacy over control of parks.

“In the process, about eight vehicles were burnt and 10 vandalised. One person was killed. Five cutlasses and four expended cartridges were recovered. Normalcy has been restored as adequate security has been made to avert any further breach of the peace.”