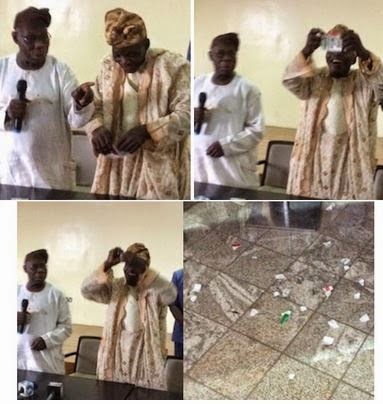 Revelations coming from Ogun State is that former President Olusegun Obasanjo might have shunned a secret peace move by the Peoples Democratic Party, PDP, and President Goodluck Jonathan.

It was gathered that as part of the President’s visit to Ogun State on Friday, Jonathan and the leadership of the PDP had planned to meet secretly with Obasanjo with a view to make peace.
The PDP said: “We agree with Lamido that we should not allow Obasanjo leave like that. We will do everything within our power to bring him back."

But according to Punch, the former president, who had got wind of the peace move, traveled to Gambia on Thursday.

Investigations revealed that Obasanjo would have been part of the closed-door meeting Jonathan had with some Ogun State traditional rulers on Friday, but for his absence from the country.

An aide of the former president, who pleaded anonymity because Obasanjo did not mandate him to speak on the issue, explained Baba’s main grouse with Jonathan.

He said that the major problem the former president had with Jonathan and the PDP was the promotion of a chieftain of the party, Mr. Buruji Kashamu.

“I can tell you authoritatively that Baba’s (Obasanjo) problem with the President and the PDP is the promotion of Kashamu,” he said.

The aide recalled that Obasanjo had in 2014 written a letter to the then PDP Chairman, Dr. Bamanga Tukur, and complained about Kashamu’s membership of the party.

In the letter dated 7 January, 2014, Obasanjo said he would, temporarily, cease to be a member of the party by withdrawing from its activities because Kahamu had been extolled as a party leader.

“I will consider withdrawing my activity with PDP at local, state, zonal and national levels until the anomalous and shameful situation is corrected,” he had said.

The aide said rather than address Obasanjo’s complaint, the PDP had appointed Kashamu the Chairman of its Mobilisation Committee in the South-West. Kashamu has also won the PDP senatorial ticket for Ogun-East Senatorial District.

The game got to its peak on Monday as Obasanjo dumped the PDP and directed the party Chairman in Ward 11, Abeokuta North, Mr. Usman Oladunjoye, to tear his membership card.