Home Gossip News Strange Miracle Water Gushing out of a Tree in FUT Owerri; Students Claim its a Sign from God (WATCH VIDEO)

Strange Miracle Water Gushing out of a Tree in FUT Owerri; Students Claim its a Sign from God (WATCH VIDEO) 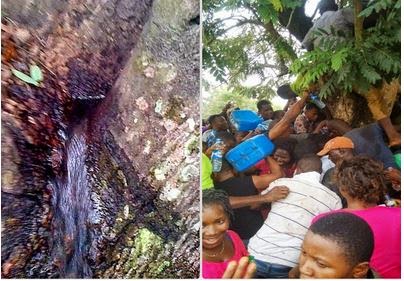 Something unnatural occurred at Federal University of Technology Owerri on the 11th February, 2015. Students and staff of the institution were seen rushing to a site where water gushed out from an old tree opposite the All saint chapel FUTO. Most of the students struggled to fetch the water as they believed its a sign from GOD.

An eye witness who spoke with reporters said:

We saw the water coming out of the tree with full force as if it was being pumped and we all rushed to fetch the water because we believe its from God.

According to a professor in the institution, he said:

A big pipe running across that tree for don burst and water due to capillarity rose up the tree and the water come out through the pores of the tree.

As at the time of filling this report, we are still yet to ascertain where the water came from as many believed its from God.