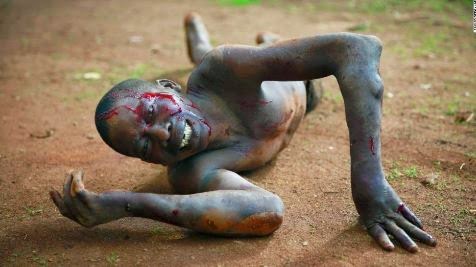 Pandemonium broke out in a border village of Konshisha and Oju local government areas of Benue State when a suspected criminal, who was among the armed robbers that attacked a bank, was burnt to death.Leadership ng reports

Recall that suspected gunmen, armed with dangerous weapons and ammunition, numbering about 20, had, weekend, raided the First Bank branch in Vandeikya LGA of the state, carting away huge sums of money, and killed several others in the process.

The dare devil robberse had a gun battle with the police in the area while trying to escape. The vehicle conveying the robbers, however, crash landed and somersaulted into the bush.
It was gathered that many of the robbers fled with bullet wounds and unfortunately for one of them, was apprehended by the villagers, and instantly set ablaze.

A villager who simply gave his name as Ejum told newsmen yesterday that, “One of the robbers who was trying to escape while the gun battle with the police was ongoing fell into the hands of the villagers and was given juggle justice”.

According to Ejum, the arrested culprit had confessed to being a member of the robbery gang and that the revelation angered the locals who could not wait for police intervention as they hung tyre on his neck and set it on fire.