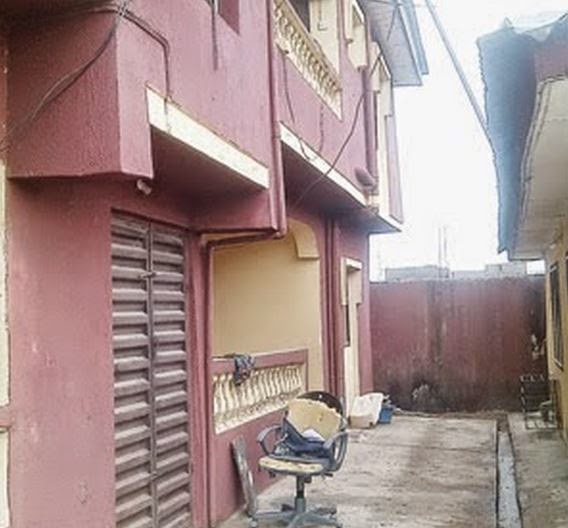 Residents of Adefowope Street, off Beach Road, Etegbin, in the Otto Awori Local Council Development Area of Lagos are divided over the reasons that could have made a woman to push her husband from the balcony of a one-storey building on Valentine’s Day.
It was gathered that the incident, which happened in the community, had left neighbours and residents at loss over what might have actually transpired.

It was learnt that the woman, identified as Onyinyechi, in anger pushed her husband, George, from the storey building, leading to the husband’s death.

While some residents claimed that Onyinyechi, who was a teacher in a private school in the area, was angry that her husband did not give her a Valentine’s treat on a day when most lovers made out time to celebrate each other, other residents said the couple was quarrelling over a monetary issue before the incident.

A man, who claimed to be a close friend of the deceased, however, insisted that the cause of the couple’s misunderstanding bordered on plans for Valentine’s Day.

Speaking on the condition of anonymity, he said,
“George returned home in the evening of Valentine’s Day, a time the wife felt was already too late to go for an outing. She got angry and it resulted in a fight.”
Another source, who also claimed to have a close relationship with the family, however, said the cause of the fight was monetary issue.

He said,
“A family friend had given George money to give to his wife as gift for their newborn baby. George did not only keep the money to himself, he also did not tell his wife about it. Onyinyechi later met the man, who asked her if she got the gift he sent through her husband. She was not only surprised, but furious that George could keep such a thing from her. It was in the process of asking him about it on the evening of Valentine’s Day that the fight started.”
A neighbour, who also spoke to our correspondent on the condition of anonymity, explained that the incident happened around 4pm on Valentine’s Day.

She said,
“On Saturday, at about 4pm, my daughter rushed inside my apartment where I was sleeping to wake me up that Iyawo (Onyinyechi) and her husband were fighting upstairs.
“As she was still explaining to me, I heard a sound of something falling. I rushed out only to discover that it was my neighbour, George. I started screaming for help and other neighbours rushed in to assist me. We got a tricycle and rushed him to a hospital.
“The wife, however, remained upstairs in her apartment. She didn’t bother to come down to assist us, despite the fact that her seven-month-old daughter was downstairs playing with my children. George was certified dead at the hospital and we couldn’t take him to the mortuary without his family’s consent, so, we brought him back home and called his family members.”

Another neighbour, who identified herself as Mama Ifeoma, who was part of the people that took George to the hospital, said the doctor discovered a cut in his head.

She said the doctor explained that the injury could be as a result of an object that must have been used to hit him on the head.

She said,
“The doctor told us that George must have been dead before he was pushed down from the balcony
When our correspondent sought Onyinyechi’s comment on the issue, it was discovered that she had traveled to her home town in Nnewi, Anambra State with her daughter.

The Lagos State Police Public Relations Officer, DSP Kenneth Nwosu, has yet to respond to enquiries on the incident as of the time of this report.