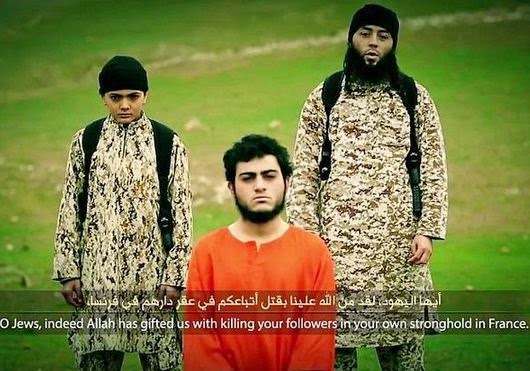 Islamic State militants have released a sickening video which shows a boy of about 10 years old shooting dead a captive Israeli-Arab who was captured by the terror group last year.

19-year-old Muhammad Said Ismail Musallam, who was taken by jihadists in Syria, told the story of his training,before been in the middle of the field, kneeling in front of an armed ISIS militant, before he is shot in the back of his head by the young boy.

In an interview published last month by Islamic State's online English-language magazine Dabiq, Muhammad Musallam, 19, said he had joined the insurgent group in Syria so as to report to the Israelis on its weapons caches, bases and Palestinian recruits.

After his conduct aroused the suspicion of Islamic State commanders, Musallam was quoted as saying, he broke cover by phoning his father in East Jerusalem, leading to his capture.

'I say to all those who want to spy on the Islamic State, don't think that you're so smart and that you can deceive the Islamic State. You won't succeed at all,' he said, according to Dabiq.

According to Haaretz, Musallam's father, Said, denied his son was a spy, saying he went missing after visiting Syria to join ISIS.

The paper reported his father as saying:

'He is not a spy, he went over on his own - they recruited him on the internet.

'I don't know what they said to him or how they got into his head, but he is not connected with the Mossad, the Shin Bet security services or anyone else.'