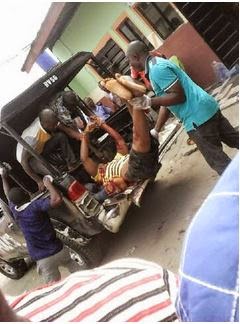 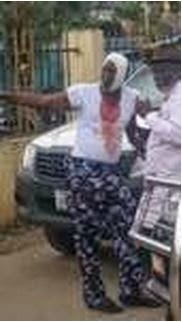 I just received gruesome photos of dead men and a press statement from the APC in Rivers state. Looks like election in some areas in the state was very violent. Read statement below and see the pics after the cut.. *viewer discretion advised*

Today’s presidential and National Assembly elections have turned out to be a big nightmare for the All Progressives Congress (APC) in Rivers State, with the members being killed, attacked and disenfranchised in various parts of the State.

“Armed militias working for the Peoples Democratic Party (PDP) have intensified their killing of APC members. Scores have already been killed and several others marked for elimination. This morning in Kpite Town, Tai Ward 2 and other areas of the State, five people were shot dead by PDP’s armed militia, and that was before accreditation commenced,” Rivers APC Chairman, Dr. Davies Ibiamu Ikanya, said in a statement in Port Harcourt. Pictures of our killed members are attached.

Lamenting his party’s ordeal, Ikanya said: “It is sad that PDP and its collaborators are targeting APC strongholds and chieftains for attacks and killings. To intimidate our people and contrary to the court ruling forbidding the use of the Army in this election, there has been a massive deployment of soldiers in the State with clear instruction to shoot at sight any APC agent that refuses to comply with the evil plot of PDP to write the results of the election at some designated areas of the State in favour of PDP.”

•Hon. Chidiebere Okwuwolu, former Commissioner and currently an APC leader, was arrested by police and taken to Olu Obasanjo Police Station in Port Harcourt along with 99 other arrested APC members scattered in various Police Stations in the State.

•At Ubima, the home town of Governor Chibuike Amaechi, the INEC results sheets are currently with Chief Nyesome Wike, the guber candidate of PDP in Rivers State. Governor Amaechi has refused to embark upon any accreditation because of lack of result sheets in all the polling units in the State, a situation contrived by INEC and PDP to make room for PDP to rig the election.

•At Andoni, the Local Government Area of Rivers State APC Chairman, Dr. Davies Ibiamu Ikanya, and Chief Uche Secondus, the National Vice Chairman of PDP and his cousin, Engr Tele Ikuru (the Deputy Governor of Rivers State who few days defected to PDP) hell has been let loose; electoral materials have been hijacked by PDP agents in connivance with the Army that has been threatening to arrest and kill any APC chieftains in sight.

•The Caretaker Committee Chairman of Andoni Local Government area, Esuku Esuku, has been ordered out of Ngo, headquarters of Local Government, by the Joint Task Force (JTF)/army personnel deployed to Ngo, or be killed. •At Abonnema, headquarters of Akuku-Toru Local Government, materials are being distributed from the house of Minister of Sports, Chief Tammy Danagogo, instead of the INEC office, without any security personnel. Danagogo has held the policemen that ought to escort these materials to the polling units hostage and injuring DPO of Abonnema, Mr. Joseph Kayode for daring to accompany Hon Isobo Jack the Commissioner for Urban Development to the Polling Unit, relevant pictures attached.

•PDP thugs hijacked materials and INEC personnel meant for Akuku-Toru Wards 15, 16 and 17. The hijacked materials and men were taken to Freetown, a hinterland coastal community. The attack was led by two youths whose identities are known. •In Tombia, in same Akuku-Toru Local Government, PDP had by Friday night filled the community with Ijaw Youth Council (IYC) bouncers who were attacking APC members and, at the same time, preventing those returning home to vote from entering the town. They were doing so in the presence of soldiers who were too few in number. The Caretaker Committer Chairman and others were injured on Friday. The over 30 APC members that were to act as agents were arrested. •In Buguma, which is the Headquarters of Asari-Toru Local government, policemen were busy all day arresting APC chieftains. •In Gokana Local Government, trained INEC ad-hoc personnel were replaced with untrained manpower suspected to be PDP members. This is believed to have been done in connivance with the LGA Electoral Officer (EO).

•At Opobo/Nkoro, the Local Government Area of Dr. Dakuku Adol Peterside, the gubernatorial candidate of APC, the house of Opobo/Nkoro Caretaker Committee Chairman, Loveday Jaja, was torched after he escaped to avoid being killed by the PDP hoodlums. Electoral materials meant for the Local Government Area have been diverted to John Africa/Ada Tom Pepple Compound area where they are thumb-printing in favour of PDP. One Barrister J.B Pepple was caught with stained thumbs and he admitted to thumb-printing. Another person Alafagha Oko-Jaja had his head broken head and he is seriously bleeding. No one is sure if he will survive. The army has been going around the community harassing people while Chiefs in Kalaibiama are compelling them to vote for President Goodluck Jonathan of PDP. This is said to be on the orders of Chief of Army Staff, Major-General Kenneth Minimah, who is also from the town.

Mr. Harold Peterside a PDP Agent in Unit 006 Ward, Oopbo/Nkoro was caught with INEC Register and fake Results Sheet at the Polling Unit.

•At Oyigbo LGA, 40,000 incident forms were being given out at 6:30 a.m. but they stopped when the APC Agent complained about it. He was however asked to leave the INEC office at about 11:30 a.m. Already, 120,000 incident forms have been to Port Harcourt LGA, 80,000 to Obio/Akpor and 50,000 to Ikwerre LGA. The incident forms are one of the ways PDP plans to use to rig the elections around the country, especially in the South South and South East.

•In Okrika, there was sudden change and appearance of fresh and inadequately trained INEC ad-hoc staff who tried to persuade voters to undergo manual accreditation, claiming that card readers assigned to Okrika LGA polling booths were not working (even without trying them). In a few units where APC supporters insisted on ‘No Card, No Accreditation’, the card readers mysteriously began to work. But in majority of the places manual accreditation is being undertaken. Also in Okrika, there is insufficient delivery of electoral materials by INEC. Up till now no one, not even party agents, has seen the original result collation sheets. The INEC officials claim it is not everything that they must explain. Meanwhile, INEC delivered incident forms far excess of the number of registered voters.

Meanwhile, PDP stalwarts are openly parading bundles of PVC cards in their possession. Rowland Sekibo, accompanied by police and PDP thugs armed with guns, are going around chasing away APC members from doing accreditation. They had done so in wards 1, 7, 8, 9 and 2. They tore the tags of our agents, beat them and chased them away, injuring scores of them.

“We condemn this brazen rape of democracy by PDP in collaboration with INEC and the security agents. It is unacceptable as this is not what democracy should be. PDP should allow Rivers people to vote without guns pointed at their throats,” Dr. Ikanya said in the statement.

Dr Ikanya passed a vote of no confidence on the State Resident Electoral Commissioner, Gesila Khan, declaring that she has failed woefully as she is bent on carrying out her secret agreement with PDP to return victory to the party at all cost. Whatever trash she will announce as the result of today’s election is not acceptable to us and we ask for her immediate transfer and a new date be set for a proper election in Rivers State than the sham and charade that was calculated to rubbish INEC and democracy.

The pictures of our killed members are attached.