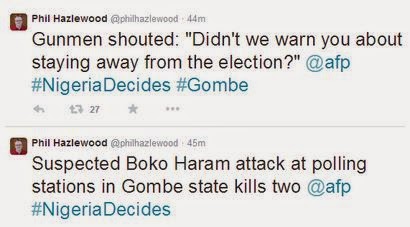 Two people have been killed at two polling units in Birin Bolawa and Birin Fulani in the Nafada district of Gombe state this morning by Boko Haram members.

According residents of the villages who spoke with AFP, they said suspected members of Boko Haram stormed the polling units, attacked the electorates and killed two people. An election official who spoke with AFP under anonymity, said: “We could hear the gunmen shouting, ‘Didn’t we warn you about staying away from (the) election?'”. Phil Hazlewood is AFP's bureau chief in Nigeria.