Home Gossip News Buhari is as old as my mother, he should go and relax – Fayose

Buhari is as old as my mother, he should go and relax – Fayose 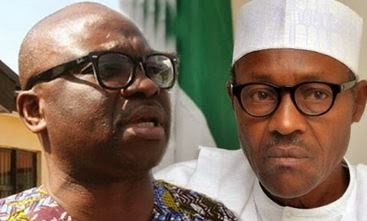 PDP has two headaches at the moment - Buhari is too popular, INEC will stop rigging with Card Reader.

Ekiti State Governor, Mr Ayodele Fayose has asked the leadership of All Progressives Congress (APC) and the party’s presidential candidate, General Mohammadu Buhari to apologize to Nigerians for dishing out naked lies on daily basis on issues that are very fundamental to the corporate existence of the country.

While questioning the moral right the party and its presidential candidate, Buhari, had to contest the March 28 presidential election, Fayose said in a sane clime, that APC and General Buhari could have withdrawn from the race.

According to a press statement issued in Ado-Ekiti, Monday, by his Special Assistant on Public Communications and New Media, Lere Olayinka, the governor noted with dismay the contemptuous manner in which the APC and Gen Buhari hold Nigeria and its people.

Fayose who reeled out many instances where APC had openly lied to Nigerians on matters that are very important for the peace and progress of the country “In saner climes, you can’t lie and be discovered to have lied repeatedly as done by the APC and still want to stand for elections.”

“The new deceit from the APC is to use a photoshoped picture of Buhari for posters in Lagos, making him look like a 50 year old man, whereas he is as old as my mother and cannot survive the rigoursof office even as a governor not to talk of President of Nigeria.”

He noted that it was appalling that despite being found to have lied on several occasions, the APC has never deemed it necessary to apologise to Nigerians for trying to deceive them.


His words; “First, the APC Vice Presidential candidate, Prof Yemi Osinbajo, a supposed pastor posted picture of Reinhard Bonke crusade on his Twitter Handle, claiming that the picture was that of APC campaign rally in Kano.

“Second, the APC claimed that Buhari made a surprise visit to Chibok and went further to lie that the people and parents of Chibok girls were filled with hope and joy upon sighting Buhari and his entourage, and escorted him into Chibok with singing and dancing.

“Third, the APC cabal claimed that Buhari travelled to the United Kingdom on a working visit and used fake pictures to back up their lies that Buhari met with ex-British Prime minister, Tony Blair and had a television interview in London."

Funny enough, Tony Blair has confirmed that he indeed met with Buhari.