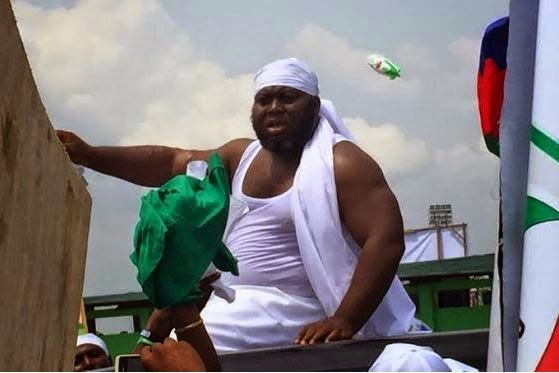 Thousands of youths led by Alhaji Mujahid Dokubo-Asari, marched the streets of Warri, Delta State, in a show of strong solidarity and support for President Goodluck Ebele Jonathan’s re-election. Under the auspices of the Niger Delta People Salvation Front, NDPSF,Alhaji Dokubo- Asari stated that it shall be gun for gun, bullet for bullet, bomb for bomb should Buhari attempt to cause chaos after losing the election.

He warned that Buhari must never be allowed to get close to power as he is a disaster waiting to happen, adding,

“He is a spent force with a stale mind incapable of leading a multi complex Nigerian State.”

He said he was corrupt and immoral, while his wife had the guts to insult the women of the Niger Delta, especially the good women of Edo State by calling them prostitutes.

Dokubo Asari, insisted that Muhammadu Buhari remained a tyrant and unrepentant dictator who ought to be striped of his military honours as he rose the rank and file by unfair, immoral and corrupt means, having not been qualified.

” Muhammadu Buhari ought to be in jail and not allowed the luxury of contesting an election with sane people. He is the face of deceit,” he said.

He called on all good people of the Nigerian Union to vote for Dr. Goodluck Jonathan, who though not perfect, remains the most credible option for moving Nigeria forward and restructuring Nigeria.

He remarked that Good luck Jonathan remains our collective symbol of freedom from predominance.