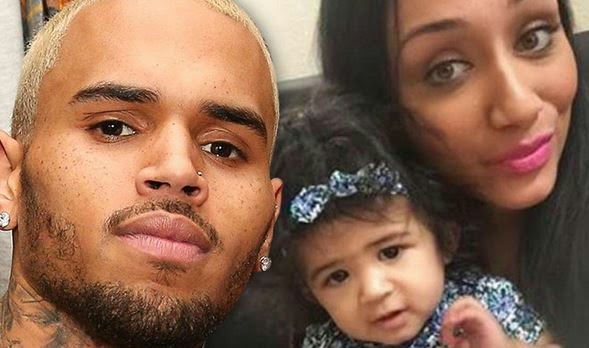 Chris Brown has a new love in his life and that's not Karrueche, but his little baby girl,Royalty..Chris Brown is so besotted with her that ,he is trying all he can to bring his daughter close to him,even if it involves living close to his baby mama..

According to TMZ,Chris has reportedly asked Nia Guzman to relocate to Hollywood so that he can spend more time with their nine-month-old daughter Royalty.He doesn't want it to just be visits on tour but wants a real father-daughter relationship.

He's asked Nia to move to L.A. with their daughter and he'll foot the bill for housing,'

He's not romantically involved with Nia, but we're told he genuinely wants a meaningful relationship with Royalty. He's saying he'd like to see her every day.'Chris and Nia are said to currently be in 'negotiations' over child support.He is reportedly paying more than is required but recently 'threatened' to withdraw payments as he suspects she has been leaking stories about him to the press.However, if she agrees to relocate, the star has said he will continue to pay the same amount he has been so far and will also provide her with a place to live.