Home Entertainment Funzy Gossip Couple Caught Banging inside a Car in Kenya, while their child watches out [PHOTO]

Couple Caught Banging inside a Car in Kenya, while their child watches out [PHOTO] 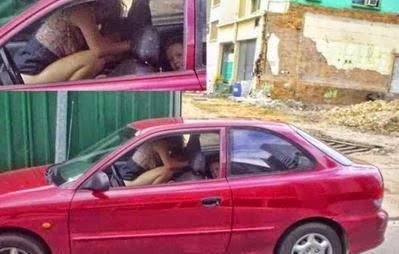 An irresponsible couple who could not just wait to get home decided to have $ex in the front seat of their car while their little daughter watched from the backseat probably wondering what was really going on.

Residents in the area on Nairobi, Kenya where the duo were caught in the raunchy act were stunned at the sight.

The unnamed couple were apparently caught in the euphoria of the car quickie oblivious that it would dot on the innocent child’s morals.

The romp which reportedly lasted for half an hour attracted the attention of several onlookers who watched the duo.

It was gathered that the couple had probably gone on a date with their daughter and were so heavily drunk to the point that they just couldn’t help but have a steamy $ex inside the car with the windows wound down.

Ah! Too bad, I remember when I caught a couple in a car, when I was small!