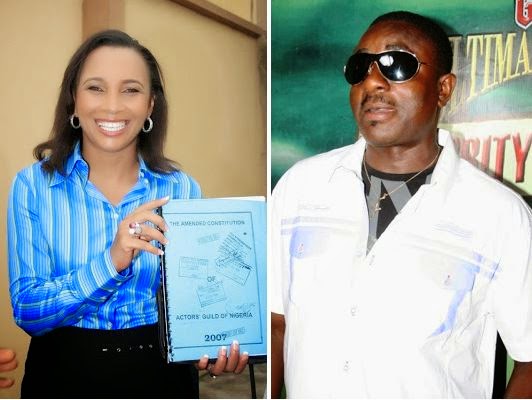 Justice James Tsoho who gave the ruling, said the election was conducted against court order and ordered all parties involved to maintain the status quo. The suit was filed by an actor, St. Maradona Mikevine, who was the national treasurer in the election that produced another popular actor, Emeka Ike, as AGN president.

Mikevine, in his suit, argued that the election that brought Ibinabo into office was conducted in the face of a subsisting court order restraining the conduct of AGN election.

NationalMirror adds that he had urged the court to determine whether it was proper for an election to be conducted in the face of an order to the contrary, and whether anyone could parade himself or herself as AGN executive based on an election conducted against a court order.

The suit that brought about the initial order was filed by Emeka Ike.

But Ibinabo who insisted that she was not the one that conducted the election that produced her as AGN president but the AGN board itself, had stressed that Mikevine ought to have channelled his grievance with the election to the Electoral Committee of AGN and not the court.

Ike had filed the suit on July 25, 2013 to contest the formation of an illegal government coined “National Unity,” to run the affairs of the AGN. The actor had sought an order of court, reviewing the 2007 Constitution of the guild, as it relates to the tenure of members of board of trustees.

However, the National Executive Council of the guild has issued a release, saying that Mrs Egbuka is still their president. The National Executive Council of the Actors Guild of Nigeria, AGN, received news of the judgment of a Federal High Court in Lagos on the 16th March 2015 , which annulled the AGN election of November 2012 which brought Ibinabo Fiberesima into office.

While we shall abide by the judgment of the High Court, we shall be guided by the Constitution of the Guild which stipulates that there shall be no vacuum in the leadership of the Guild.

In view of this, Ibinabo Fiberesima remains the National leader of the AGN as the court did not declare Emeka Ike President of the guild. However, the Registered Board of Trustees has gone to the Appeal Court to challenge the judgment.

However, the Registered Board of Trustees has gone to the Appeal Court to challenge the Chief Ibinabo Fiberesima urges her members, supporters and teaming fans to remain calm and peaceful as AGN remains one family.

This judgment has not in any ways affected the resolve of Chief Ibinabo to take the Guild to the next level.