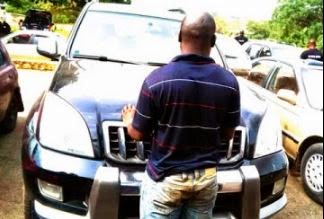 A Toyota Landcruser belonging to the Delta State Government has been recovered from a suspected robber in the Saki, Oke-Ogun area of Oyo State by the police.

It was gathered that the suspect, John Pouoro, was nabbed while driving the vehicle with suspected members of his gang across the border to the Benin Republic.

The black jeep with number plate, DT 25 B-31, was said to have been recovered by the Oyo State Police Command on March 11.

It was gathered that the suspect told the police that he was playing the role of a courier for his principal, who he identified simply as Alhaji Sokoto. Opuoro added that he was promised N150,000 for the job.

The police said the Alhaji operated a cross-border car-snatching ring from the Benin Republic.

The state Commissioner of Police, Mohammed Katsina, said Opuoro offered bribe to the police at the spot of his arrest after other members of the gang managed to escape. He added that the car was snatched at gunpoint with the driver wounded and taken to a hospital.

“A team of policemen on foot patrol, led by Inspector Samuel Godwin, intercepted a black Landcruiser along Saki/Ilesa Baruba Road on March 11 this year.

“The cross-border robber, accompanied by other members of the gang, now at large, attempted to transport the vehicle to the Benin Republic where a notorious receiver, identified as Alhaji, was waiting to collect it.

“Opuoro, tried to bribe the police when he was arrested. Investigation revealed that the vehicle was snatched at gunpoint in Delta State. Efforts have been put in place to apprehend the rest of the gang. If they had succeeded, they would have sold the car back to Nigeria as a fairly-used car.”

“I was in Lagos when Alhaji Sokoto, who I met in January this year, called me from Cotonou. He said a car was on its way from Delta and that I should bring it to Cotonou. But he later told me to collect the car in Ore. I took it from one Emeka in Ore.

“On my way, I was tired and while sleeping somewhere, the police came and arrested me. I’ve once helped Alhaji to drive a car to Cotonou.”