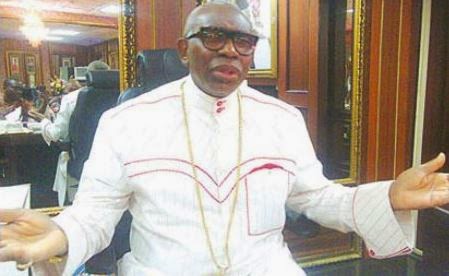 The cleric advised them to see Martin Luther King as a role model in fighting for a violence-free election.

He gave this charge while fielding questions from newsmen at the Selma Movie Premiere that took place at The Congress Hall, Transcorp Hilton Hotel, Abuja.

He said, “I am touched by what I have seen so far and I think it is a flick worth watching.

“When you hear of Martin Luther King Jnr., you are not hearing of an angel but a human being, a human being who could see and feel what others felt, and decided to do something about it.

“So if you want peace, then you must be prepared to speak and say the truth at all times even when it is bitter.”

Oritsejafor who leads the Warrri-based Word of Life Bible Church also stressed on the need for Nigerians to obtain their Permanent Voter Cards (PVCs) before the March 28 and April 11 general elections so as not to be disenfranchised.

On his part, Prof. Jerry Gana, a former Minister of Information, who also gave a brief speech, said Nigerians should come together and say no to violence before, during and after elections.

Re-elect Jonathan, Buhari has nothing to offer – Fani-Kayode urges Igbos
He said “the fruit of the spirit is love and joy and peace and patience and goodness and gentleness and self control”.

I don't even believe this man again, cus I can see he is dirty himself! Hiding under God's work!....