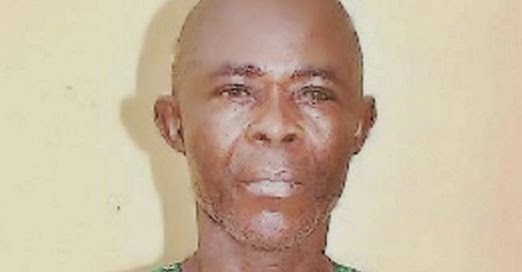 A 50-year-old traditional healer and Pastor of the Brotherhood Church, Udo Obot Job is now cooling his heels in the cell of Akwa Ibom State police command for allegedly defiling a 14-year-old girl, Mary Bassey.

The incident, Saturday Sun learnt, led to the death of the victim’s father who was ill and receiving treatment at Job’s healing home when the alleged rape happened at Ukat Aran village in Nsit Ubium Local Government Area of Akwa Ibom State.

It was gathered that Mrs Eno Bassey had on February 13 taken her husband, Mr. Stephen Bassey to Job’s heal­ing home for possible recovery from stroke. The state Po­lice Commissioner, Mr Gabriel Achong, who confirmed the development, said that the suspect had demanded N400,000 for the treatment of Bassey.

He said that the family of the victim’s wife was able to raise N350,000 for the treatment while on February 14, the suspect allegedly told Mrs Bassey to go to the market to buy some food items for her husband.

It was learnt that while she went on the errand, her daughter, a14-year-old Mary Bassey was drugged and thereafter deflowered.

“Immediately Mr Bassey heard what Job did to his daughter, he collapsed and died,” Achong told Saturday Sun.

The Assistant Commissioner of Police, State CID Uyo, Mr. Mike Okoli added that the suspect has been arrested and the victim, Mary Bassey taken to Akpa Utong College Hospital where Dr Ubong Okon confirmed that she was defiled.

“The incident happened on February 14, when the suspect told my mother that she should go to the market to buy some food items for my late father. Pastor Job told me to pick some sand from the ground which he said he would use to send away some ghosts fighting my father.

“I did it by picking some sand from the ground and immediately, Pastor Job gave me some drugs to use. He told me that he wanted my future to be bright. After that, I found myself on the floor, he took me to her room and had sex with me and after I regained my consciousness, I started shouting. I saw blood and he said I should go to the stream to bathe. I then called my brother, Essien and we went and reported the matter at the police station at Nsit Ubium.”

“I am a pastor and I head the Brotherhood church at Ukat Aran village. I have been into the ministry for 12 years now and I am a known traditional healer. It was on February 13, 2015 that Eno Bassey brought her husband, Stephen Bassey who was suffering from stroke and I promised to heal him. I instructed Eno to go and buy food items in the market.

“I drugged her daughter and took her into the room and defiled her. It was the devil that pushed me into it. Mr Bassey died in my church when he heard of the incident”, he said

CP Achong assured that Pastor Job will soon be charge to court.