‘How I Slept with Prominent Pastors and Ministers’ – International Prostitute 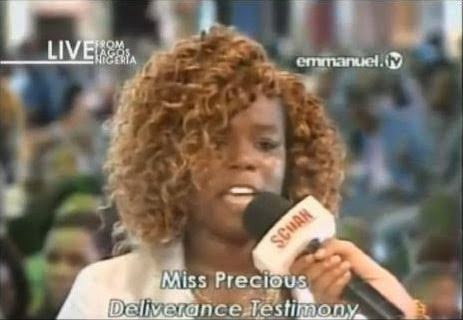 A young lady who was declared missing over a decade ago in Ghana has turned up at Pastor T.B. Joshua’s church in Nigeria with a harrowing tale to tell.

“I was an international prostitute,” the young lady who gave her name as Precious tearfully told the congregation at The Synagogue, Church Of All Nations (SCOAN) on Sunday, March 15, 2015.
According to Precious, her problems emanated from an unusual encounter she had with a man coming home from school aged 15. “He asked me to give him an apple I had eaten,” she explained.

“When he was going, he smiled at me in a weird way. That night, I saw the same man in my dream sleeping with me. I woke up in a pool of blood.”

The once bright and prodigious student began mingling with bad friends at school and was forcibly introduced one night to an intoxicating mix of alcohol and marijuana, causing her to pass out.

“When I woke up, I saw myself Unclad on the bed and realised someone had slept with me,” she confessed.

Convinced to run away from home, Precious’ new group of friends introduced her to a lady leading an international prostitution ring.

Equipped with skimpy clothes and housed in a luxurious apartment, the young girl entered fully into the dirty world of prostitution, sleeping with multiple men every night.

Unbeknown to her, a manhunt had ensued for Precious, her disappearance from home even being announced on national television and radio.

Apart from dressing seductively, the young lady was informed diabolical routes must be taken to ensure success in her fledgling ‘career’.

Taken to a notorious witchdoctor, a special cream mixed with the follicles of her vaginal hair was prepared for the purpose of seduction.

Precious’ new lifestyle was accompanied by an intense addiction to alcohol and smoking to the extent that it practically replaced food.

“I didn’t just drink beer,” she explained. “I would take whisky or hard liquor instead of eating food. As much as I was smoking and drinking is as much as I would get clients.”

Branching out on her own after staying with her ‘love-vendor’ for just two months, Precious rented an apartment to continue her immoral activities.

“I was going out with only big men, oftentimes ministers,”she admitted. “I didn’t just go out with any men at all. Our pictures were in all the big hotels. I would initiate them into our society.”

Asked how she was able to ‘initiate’ men of such status, Precious explained that the witchdoctor or ‘baba’ had given her a dark substance to drop in their drinks.

Seeking even more seductive powers, the young lady returned to the same spiritualist. “I found myself Unclad after drinking from the shrine there,” she vividly described.“I saw this man putting his mouth on my private parts and blood was coming out.”

Another cream was prepared, this time with her own blood, ground with the particles of a mirror and water from the shrine. In addition, a ring and chain with spiritual implications were presented to her.

“I would place it on my neck and wear a sexy, dark dress,”she said, explaining the function of the chain. “It would be in the middle of my bosoms. Immediately you set your eyes on me lustfully, you would follow me and get confused.”

Living large, Precious soon had 16 ‘bodyguards’ following her, drove the latest vehicles and donned the latest fashion. Her next target was pastors.

“The witchdoctor said I should sit in the front seat of the church, wearing a sexy dress,” she narrated. “Once the pastor sets his eyes on me, within fifteen minutes, he would call me out, pretend to give me a Bible quotation but actually give me his phone number… Whether he’s married or not, he must sleep with me that same day.”

The lives of all the men she encountered sexually were automatically destroyed. “That’s how I brought down a very great pastor in my country,” she added, acknowledging though that she was only able to entrap clerics who were not genuine in their Christianity.

Additionally, Precious explained that promiscuous pictures of hers were available all over the internet, also pushing men to sin. “I placed my pictures on Facebook. Whoever you are, as you are looking at my picture, you will begin to self-service yourself,” she stated.

Despite obtaining large amounts of money, Precious acknowledged that she ‘didn’t achieve anything’ with her resources and her beauty was steadily fading away although she was just in her late 20s.

One day, a man dressed in white apparel met her on the street and requested for money. Reluctantly obliging, the man said God would bless her for her generosity and advised her to visit Prophet T.B. Joshua’s popular church in Lagos, Nigeria.

“I saw the man in my dream that night repeating the instruction. That is what convinced me to come to The SCOAN for deliverance.”

On the prayer line, Precious held up a bottle of whiskey and cried out that her life was a mess, adding that she was ready to forsake her old life of prostitution and substance abuse. “It’s the devil,” T.B. Joshua angrily declared before praying for her. Violently reacting to the prayer, she was delivered from the spirit tormenting her.

”I now vomit at even the scent of smoke,” Precious testified, a week after her deliverance, stating that all urges to take alcohol, smoke and sleep with men had completely gone.

She tearfully advised young people not to be deceived by the lure of worldly treasures and pleasures, adding that she is actually happy for the first time in her life following her exorcism.