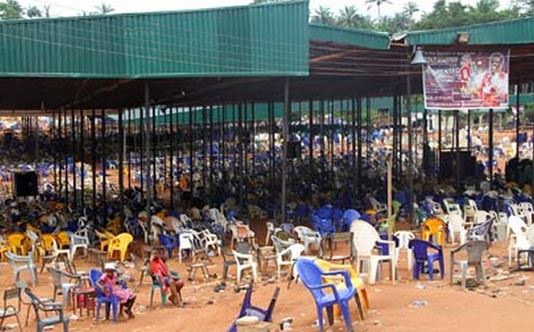 Seven ladies who went for night vigil for deliverance in a new generation church, located at 2nd Cemetery Road, Benin-City, were allegedly raped by armed bandits who stormed the church at about 4am on Thursday.

The robbers were said to have earlier raided a building near Ewuotubu community where they robbed some tenants living in four different flats in the compound. It was learnt that two persons, including a police officer, were shot dead while others sustained various degrees of injuries in the process.

What was supposed to be an all-night marathon prayer session , tagged ‘Koboko Night’, meant to cast out demons tormenting some members of the church, turned sour as the masked armed robbers, numbering six, shot sporadically, ordering the members to go back to the church shortly after they said the final prayers to depart the church.

The robbers had, on storming the church premises, rained bullets on the roof and ordered members to lie down. Consequently, they raped the women.

One of the victims, who narrated her ordeal to Sunday Vanguard, said,

“Though I was not raped, I was beaten mercilessly when they were asking us to identify the pastor and we refused. After collecting our phones, money and jewelleries, they ordered some of the ladies to undress. They threatened to kill them if they refused and, of course, they removed their clothes and were raped one by one.

“It was actually two churches that they attacked. They raped five women in our church. Later, we found out that they raped two others in a church close to ours. They ransacked the church and collected any cash they found and escaped. It was a horrible sight”.

The raped women are said to be receiving treatment at an undisclosed hospital on Ekenwan Road, Benin City.

High level of personal wickedness. Pls our all night themes should be checked (verify spiritually if God was or is the one that gave it).