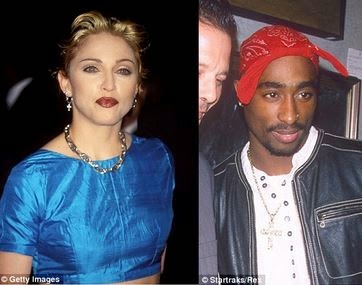 Madonna has confirmed she dated Tupac Shakur .The 56-year-old talked about her brief relationship with the rapper while on Howard Stern's SiriusXM radio show.

Stern asked her if she liked Tv host David Letterman because back in the 90s all of her interviews appeared hostile.

Madonna said she was usually flirting with the late night host except for one appearance in 1994 where she was a bit vulgar in her language.

'I was mad at [David Letterman] when I said the F-word a lot,' I was in a weird mood that day. I was dating Tupac Shakur at the time and the thing is he got me all riled up about life in general.' So when I went on the show I was feeling very gangsta.

Previously, just prior to his death, Tupac referred to Madonna as 'real nice' and someone who 'helped me a lot'.

She also revealed she was raped.She said

"I was going to a dance class and the door was locked and I needed money for the payphone[A man] gave it to me… he was a very friendly guy. I trusted everybody."

As it turns out, the unnamed person persuaded Madonna to make her phone call across the street where he lived. What came next was most horrifying.

"I was raped,"The first year I lived in New York was crazy."

On why she didn't report to the police

You've already been violated," It's just not worth it. It's too much humiliation."