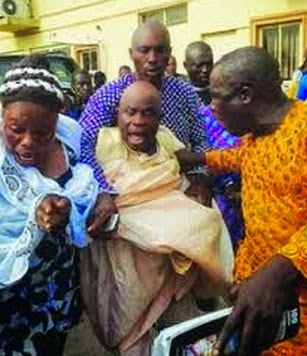 The South West Zonal Secretary of the Peoples Democratic Party, Chief Pegba Otemolu has denied the allegation that he had diverted the fund meant for coordinators of President Goodluck Jonathan campaign organisation in the state.

Otemolu who was beaten blue Black in Abeokuta, last week, during a seminar organised for 746 coordinators of Jonathan’s re-election bid in the state ,recounting his ordeal in the hands of angry party members, saying he only escaped death by the whiskers.

“I’m here to let the whole world know that I’m a loyal and honest member of our great party and at no time did anybody in the party, right from the National Secretariat of our party to the Presidency give me one kobo.

“But at the end, around 2pm, we had not received one kobo from the national committee headed by Jerry Gana. Then I called the national auditor who is the most senior person, please address our people. Tell them that the funds for the honorarium has not been made available. They should exercise patience; as soon as the money is available, it would be given to their local government coordinators.

“Before he finished that statement, there was an uproar and they started throwing chairs. They said unless they were given money, none of us would leave the venue. We were held hostage for four hours and towards the end, I appealed to them, that they should allow us to go and that as soon as the money is available, we’ll let them know.”

“Then I moved into my car but before you knew what was happening, they damaged the whole car, Honda Pilot and the car is at the Adigbe Police Station, presently. The windscreen, the rear light, the side glass, damaged, they vandalized the vehicle, back and front simply because of the non-availability of funds.

“So, that’s the whole thing. Nobody gave me any dollar. I did not collect one kobo from anybody. If anybody was to be given money, it should have been Dapo Adeyemi whose bank information was submitted in Abuja. But in fairness to him, no kobo, nothing.

“They beat me mercilessly, they tore my dresses, they were shouting Ole! Ole! I could not believe that people from my party could treat me in that manner. They are from my party.

“I was stripped half-naked and beaten. They stole my personal money, wrist watch, my necklace, my bead and total cash of about N80,000.

“So, when they now said I collected dollars from President Goodluck Jonathan and I refused to give them and I was running away, it is not true. I did not collect one kobo from anybody. I took part in the training, I gave them a lecture about the achievements of the president, Goodluck Jonathan and after the lecture people were demanding for honorarium which I was not able to give. It has nothing to do with whether PDP is not settled or not.”

“My children, three of them called me from the UK and they were weeping, telling me that I should withdraw from politics. They even called me this morning that have I taken to their advice. So, all the members of my family have been embarrassed, including my wife,” he said