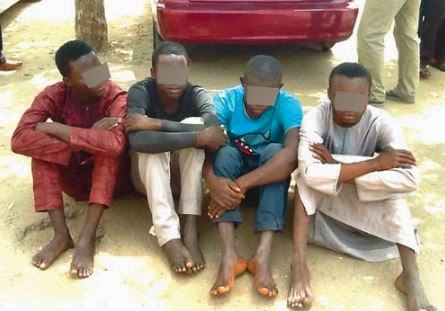 Nineteen year old Accountancy student of the Federal Polytechnic, Bauchi, Salisu Salmanu, who connived with seven others to kidnap his three-year-old step brother, Abdulkadir Salmanu, at Kofar Idi area of Bauchi, Bauchi State, has told the police that the N10 million ransom his gang demanded from his father was meant to purchase a car

Salmanu, who was paraded at the Bauchi State Police Command headquarters in Bauchi last Tuesday alongside his friends - Imrana Abdullahi (17), Abdullahi Mohammed (19) and Umar Musa (19) - told journalists that greed and selfishness were responsible for his action, as his father had been taking good care of him and providing for his needs, though there were times he could not meet some of the needs.

According to Salmanu, if his gang had succeeded in getting the N10 million from his father, Salmanu Mohammed, whom he claimed was an elder brother to the Minister of Federal Capital Territory (FCT), Senator Bala Abdulkhadir Mohammed, he would have used his own share of the largesse to buy a car and the rest to enjoy himself.

“Initially, when we planned the kidnap, I was advised that if we succeeded in getting N10 million, we would buy a car and also have money left to spend. I know that if I demanded such money from my father, he would refuse because he would tell me he has three wives and would have to cater for other children.

“So, I planned with my friends to kidnap my stepbrother, who is three years old, with the intention that my friends would call him and demand for ransom, after which I would collect my own share if paid.

“Honestly, my father meets my needs. He pays my school fees and every other thing I need. It is just greed and selfishness which the devil put in our hearts that led me into this,” he stated. Saying that it was the first time he had been involved in any crime, Salmanu claimed that he regretted his action and declared that he had had a change of mind.

One of Salmanu’s accomplices, Abdullahi Mohammed, said that they never had any intention to harm the kidnapped boy, as all they were after was to get money from the victim’s father. He, however, stated that they did not succeed with their plan because of the love God had for them.

“God loves us; that was why He didn’t give us success. We took the child, not with the intention of harming him, but so that we could get money from his father and release him,” Mohammed said.

According to him, before the gang were busted by the police, it had succeeded in negotiating for a ransom of N5 million on the boy. “We demanded N10 million but the father said he would pay N3 million and we insisted it was too small. We finally agreed that he would pay N5 million. Honestly, if we had succeeded, we wouldn’t have returned the money but this would have been our last,” he said.