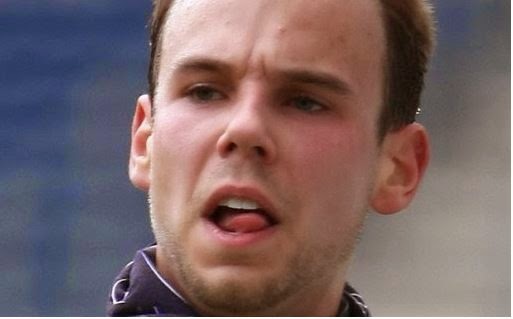 'I'm planning a heinous act that will be remembered forever': Killer pilot's ex-lover claims he said before crash

A former girlfriend of killer pilot Andreas Lubitz claimed the pilot told her once that he's planning an act so heinous his name would be remembered for ever. The girlfriend said Lubitz was a tormented, erratic man who was a master of hiding his darkest thoughts and would wake up from nightmares screaming ‘we’re going down’.

The 26-year-old Germanwings stewardess, known only as Maria W, revealed to a German newspaper how Lubitz ominously told her last year: ‘One day I will do something that will change the whole system, and then all will know my name and remember it.’ Continue...
When she heard about the crash of Germanwings Flight 4U9525 on Tuesday, she remembered Lubitz’s menacing prophecy. ‘I never knew what he meant, but now it makes sense,’ she told Bild.

Maria told the newspaper that she met Lubitz when the pair flew together across Europe and said they dated for five months last year, spending 'several nights' in hotels.

She said he was a 'nice and open-minded' man but claimed there was a difference between his professional and his private ego, with him being 'soft' and needing love when the couple were alone but becoming 'someone else' when they talked about work.

She added to Bild: 'We spoke a lot about work and then he became another person. He became agitated about the circumstances in which he had to work, too little money, anxiety about his contract and too much pressure.'

His personal problems and erratic behaviour became so severe that the flight attendant decided to call the relationship off after fearing his increasingly volatile temper.
'During conversations he'd suddenly throw a tantrum and scream at me,' she said. 'I was afraid. He even once locked me in the bathroom for a long time.'

Despite parting from Lubitz, Maria said previous conversations with him suddenly 'made sense' when she heard about the crash.
She said: ‘When I heard about the crash, there was just a tape playing in my head of what he said, “One day I will do something that will change the system and everyone will then know my name and remember me”.
‘I did not know what he meant by that at the time, but now it’s clear.’

She said he had 'never really' spoken to her about any illness but had told her he was getting psychiatric treatment.

She added: 'The torn up sick notes make sense now to me and were a clear sign that he did not want to admit that his big dream of flying as a captain was over.'

Police will want to interview the air stewardess in detail about the pilot’s state of mind, as well as his most recent girlfriend who he is said to have lived with in a smart flat on the outskirts of Dusseldorf. One report claimed they had been together on and off for seven years and were engaged and planned to marry next year.

Lubitz had reportedly ordered two new Audis for them just before the tragedy in an apparent desperate last attempt to win her back. But she appeared to have rejected his offer, as only one car was ever delivered.

It comes amid claims that their relationship broke down because he was secretly gay and was suffering torment over hiding his homosexuality. One report claimed he was taunted by fellow pilots for previously being a 'trolley dolly' airline steward and dubbed 'Tomato Andy' - a derogatory gay slur - by colleagues.

The startling revelations that Lubitz had long-plotted a spectacular act adds weight to claims the pilot concealed a medical condition that should have stopped him flying.

It comes after German investigators yesterday revealed the 28-year-old should have been off sick on the day he deliberately condemned his 149 passengers and crewmates to their deaths in the Alps.

Investigators revealed today that medical sign-off notes were found at Lubitz's home - including at least one that covered the day of the crash - and Dusseldorf University Hospital confirmed he had been a patient there over the past two months, although it would not disclose his condition.