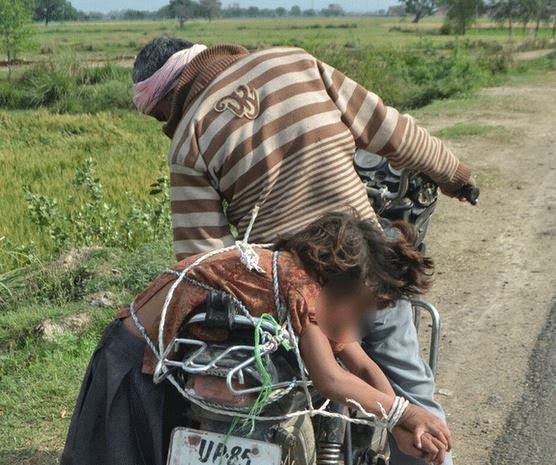 Did he do the right thing? A father in India has been arrested after he took his eight-year-old daughter to school roped to his motorcycle.

BBC reports that, the 40-year-old was arrested after local newspapers in Uttar Pradesh state published photos taken by passers-by. He has now been freed on bail.Onlookers accuse the man of cruelty but he says his daughter had an exam and was reluctant to go to school.

The man, a father of two sons and three daughters, works as a security guard at a private school

Police say he tried to persuade the girl, his youngest child, to go to school, particularly since she had a test to write.

The child was promised sweets and gifts, but when she refused to relent, her angry father tied her to the back of his bike with ropes and took her to school.

He has been charged with breach of peace, Mathura superintendent of police Shailesh Pandey told the BBC.The man spent a day in the cells but still believes he did the right thing.

"My daughter will not die if I take her to school. But she will surely die if she does not study," he told the Times of India.