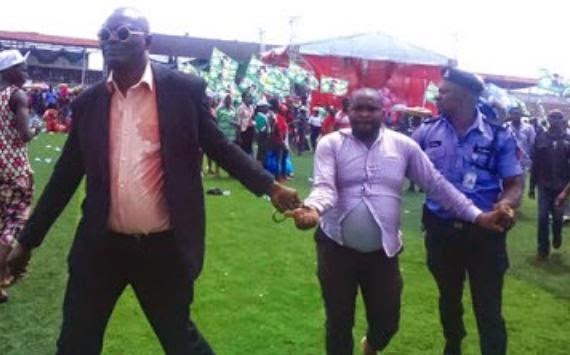 The visit of the wife of President Goodluck Jonathan, Mrs. Patience Jonathan, to Edo State, was on Saturday disrupted when some men, suspected to be aggrieved youths of the Peoples Democratic Party, pulled down some banners bearing the image of the First Lady, at the Samuel Ogbemudia Stadium in Benin, the state capital.


Mrs. Jonathan was in the state to drum support from Edo women for her husband’s re-election campaign.

It was learnt that the men climbed the fence where the banners were placed and began to pull them down as soon as it was time for the First Lady to deliver her address.

According to Punch,Irked by what they termed to be an attempt to mar the visit of the President’s wife, some youths and policemen dressed in branded T-shirts, bearing the Transformation Ambassadors of Nigeria logo, accosted the men.

It was in the process of a brewing brawl that some policemen, drafted to the venue of the rally to provide security, whisked them away in a police vehicle.

The state Publicity Secretary of the party, Mr. Chris Nehikhare, said he had no doubt that the perpetrators were sympathisers of the All Progressives Congress.

He claimed that none of the youths who had turned out for the event would carry out the act, adding that the party would investigate further.

“I am sure they were APC people. No PDP youth will be aggrieved to the extent of pulling down the First Lady’s posters; every PDP youths love the First Lady.

“But I will investigate to find out and let you know tomorrow (Sunday).”

Speaking at the event, Mrs. Jonathan insisted that her husband would remain in office for another term.