My husband must complete his two terms – Mrs. Jonathan 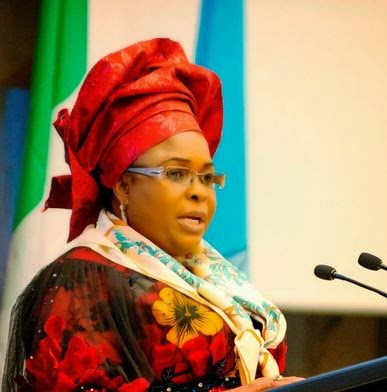 The wife of President Goodluck Jonathan, Mrs. Patience Jonathan, on Saturday insisted that her husband would remain in office for another four years to complete his two terms in office, despite the opposition.

Mrs. Jonathan, said this during the Peoples Democratic Party women rally, under the auspices of Women for Change and Development Initiative, in Benin, Edo State.

She was accompanied by national and state leaders of the party.

Women, drawn from different support groups across the state had turned out for event as early as 9am. They, however, began to leave the stadium at about 1.30pm, when Mrs. Jonathan arrived at the Samuel Ogbemudia Stadium, venue of the rally.

‎Unable to bare the scorching heat, two women fainted but were later revived by a medical team provided by the party.

A mild drama ensued shortly before the ‎First Lady’s address, when two men, said to be aggrieved PDP youths, tore down some banners bearing the image of the President’s wife.

They were, ho‎wever, whisked away by some security operatives at the arena.

Addressing the women, she said that the presidency had been occupied for eight years by other ‎geopolitical zone and wondered why the South South should be denied the opportunity.

She also noted that the Jonathan administration had performed creditably in various sectors, such as transport and education, and by her assessment, was satisfactory.

Mrs. Jonathan described the present administration as a gender sensitive government, which had prioritised women development through the appointment of several women in key positions, the Subsidy Re-investment and Empowerment Programme and the YouWin initiative.

She stressed that re-electing of her husband was an opportunity for Nigerian women to appreciate his good performance, adding that the opposition party was not dependable ‎and had nothing to offer.