'No Blacks' Chinese restaurant shut down in Kenya after widespread condemnation 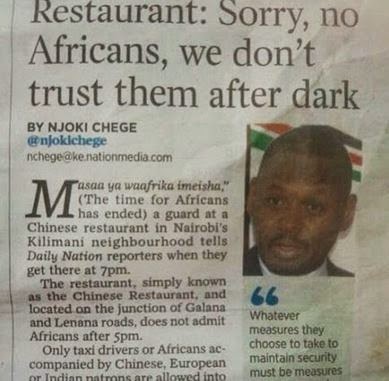 The Chinese restaurant in Kenya, which came into spotlight for not allowing blacks in after dark has been shut down..The owners have also been summoned by immigration authorities.Only taxi drivers or Africans accompanied by Chinese, European or Indian patrons are allowed into the compound.

According to the Daily Nation, the owners of Chongquing Chinese restaurant in Nairobi, Kenya ,have apologised and said the measure had been put in place following a robbery in 2013.

“We have established that the restaurant did not have the licences and I have have ordered it closed until the management complies,”

He also said that “all business and service providers must ensure that all customers and clients are treated with respect and dignity, irrespective of race colour, sex, tribe and religion,” the Standard newspaper quoted him as saying.