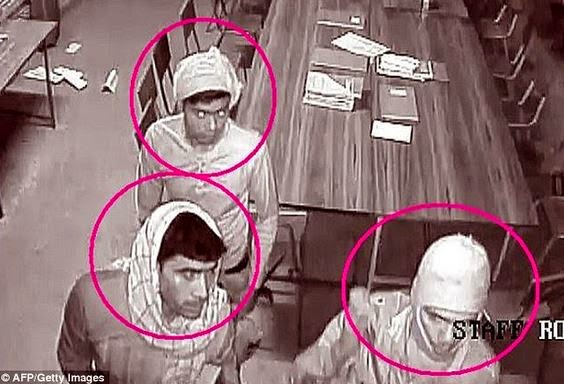 Three men suspected of gang-raping an elderly Indian nun at a convent have been pictured for the first time.

According to Dailymail, the woman, who is in her 70s, was trying to prevent the men from robbing the Christian missionary school when she was attacked.

CCTV has now been released showing the suspects leaving the staff room on Friday night. A reward of 100,000 rupees (around £1,075) is on offer for any leads, police said.

'CCTV footage showed that six men, aged between 20 and 30, scaled the boundary wall around 11.40pm and entered the school and disconnected the telephone lines.' The robbers then tied up and gagged a security guard before entering the nuns' room, where they found the women

sleeping.When the victim, who is the oldest nun at the school, tried to stop them taking another woman into a separate room they raped her.

The men escaped with some cash, a mobile phone, a laptop computer and a camera. They also ransacked the school's chapel and took holy items. Footage shows books and papers strewn across the floor as the men leave the staff room.