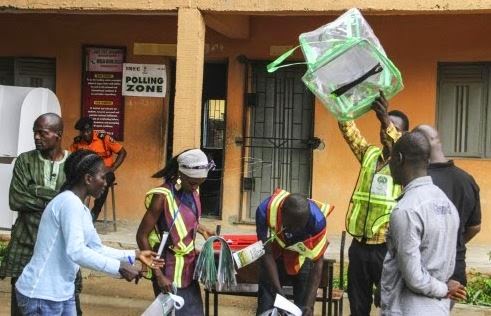 According Daily post, The All Progressives Congress, APC, on Sunday called on the Independent National Electoral Commission, (INEC) to cancel the entire result of the 2015 Presidential and National Assembly Elections held in the State on Saturday.

Although the details of the result was still being awaited, DAILY POST gathered that the PDP swept the House of Reps, Senatorial and Presidential elections.

However, the Chairman of APC in Enugu State, Dr Ben Nwoye, who spoke to reporters accused the State Resident Electoral Commissioner, Professor Chukwuemeka Onukaogu of conniving with the ruling Peoples Democratic Party, (PDP) and security agents to rig the election in favour of the PDP.

Nwoye, who is the Senatorial candidate of the APC in Enugu East Senatorial Zone, alleged that the Enugu REC handed the election materials and result sheets to the PDP candidates in all the senatorial zones in the state.

The APC chairman, who had before the election, called for the removal of the Enugu REC following his allegation that he was captain of electoral fraud, insisted that the result of the Enugu Presidential Election was fraudulent.

He said, “You will recall that when Onukaogu was redeployed from Anambra to Enugu, I raised alarm because of his bad record in the Anambra Election which was adjudged the worst poll in the history of Nigeria.

“It was due to Onukaogu,s alleged electoral fraud that caused the APC the governorship position during the last governorship election in Anambra State. PDP stakeholers specifically requested for him because he is an expert in rigging and today, Onukaogu has done that which he knows how best to do”.

He alleged that violence sponsored by the PDP marred the election at St Ann and Amachalla polling units in Amuri, Nkanu West Local Government of the state.

“The result is not acceptable to us and will not be acceptable. The Enugu REC gave the PDP result sheets which they used to write the results”, alleged.

He said that despite their complaints, the Enugu REC denied their agents tags, adding that it was after pressure and protest that he gave some photocopied tags to the APC.