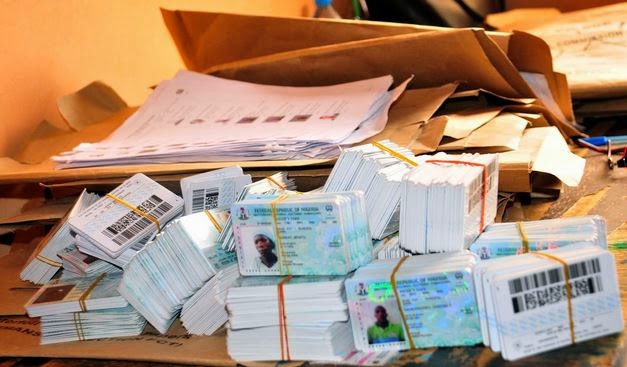 Some men with over 500 Permanent Voter Cards were apprehended by the residents of Orita Sekoni, Ogbomoso, Oyo State on Saturday.

The men were, however, saved from being lynched by an angry mob which surrounded them after getting a whiff of the information by men of the Nigerian Police.

An eyewitness said the men were apprehended by the residents at Orita-Sekoni area of the town. He said the men would have died but for the arrival of a patrol van of the men of Oyo State Police Command, who shot into the air to disperse the mob.

The eyewitness said the men were caught in a Honda Accord car with Oyo State number plate AR 892 LUY after a tip-off.

He said, “Some people noticed that those in the car were in the possession of huge amount of PVCs and alerted some of the boys in the area. They were stopped and after a search, the cards were discovered.”


He added that other things noticed in the car indicated that they were working for one of the governorship candidates from Ibadan, although he refused to say which party he is representing.

When contacted, the state Police Public Relations Officer, Adekunle Ajisebutu, told our correspondent that the command was yet to receive signal from Ogbomoso on the crime but he reiterated that the command would not tolerate any act capable of disturbing the peaceful conduct of the coming elections in the state.

He said, “We are yet to get such report. The state Commissioner of Police has said many times in his short stay here that he will not tolerate such act. The police is here to maintain law and order and that is what the command will do if anyone is caught in an attempt to disrupt peace in this state or tries to do anything that will discredit the coming poll.”