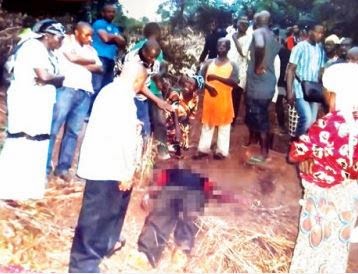 The Emereonye family has been thrown into mourning over the gruesome murder of one of its sons, Mr. Emmanuel Emereonye, a federal civil servant.

It was gathered that Emmanuel was killed three days to his retirement from the service.

Emmanuel, an administrative officer at the Federal Government Girls College, Umuahia, was on Tuesday, March 17, 2015, butchered by a labourer he hired to work for him in his hometown at Dioka Nzerem village, in the Ehime Mbano Local Government Area of Imo State.


sponsored post
It was gathered that Emmanuel had decided to build a befitting country house where he hoped to relocate to after his retirement.

He was said to have contracted some labourers to lay the foundation of the building. The labourers included one of his godson, Samuel Edomobi.

After the day’s job on the fateful day, for which he had given the labourers their daily wages, it was learnt that Emmanuel was informed later in the day that Edomobi had gone to his (Emmanuel) farm to harvest palm fruits. He rushed to his farm and found Edomobi on a palm tree, harvesting palm fruits.

Emmanuel was said to have ordered Edomobi to get down from the tree, telling him that harvesting fruits from his farm was not part of the job he paid him for. An argument ensued and in the process, Edomobi allegedly used the machete he was using to harvest the palm fruits on Emmanuel.

Edomobi was said to have left Emmanuel in a pool of blood. The neighbour that alerted Emmanuel to the fact that Edomobi was harvesting from his farm escaped from the scene and raised the alarm.

By the time the villagers reportedly arrived at the scene, Emmanuel had bled to death, while Edomobi had escaped from the scene.

It was gathered that policemen arrested Edomobi’s mother, which forced the suspect to turn himself in.

PUNCH Metro learnt that the suspect had been transferred to the state Criminal Investigations Department, Owerri, while the body of the deceased had been deposited in a morgue.

Emmanuel’s first child, Chidimma, told our correspondent on Thursday, during a visit the Emereonyes, that the family had planned to celebrate its father’s birthday ,which was to be a day after his retirement, before the incident.

Chidimma, who is a second year political science student of Alvan Ikoku College of Education, said, “My father was killed three days to his retirement and four days to his birthday. He was supposed to be 60 by Saturday, March 21, 2015. We had made plans to celebrate his birthday and retirement, but all that was not to be.”

The brother-in-law to the deceased, Izuchukwu Ohiaeriaku, said the family suspected conspiracy in Emmanuel’s death.

According to him, there had been issues on the land where Emmanuel was building his country home, which was resolved only recently. He said the house would have been completed, but for the dispute.

“Maybe Edomobi was used to perfect a plot orchestrated somewhere. The family suspects that what killed Emmanuel may not be far from the land issue,” he said.

Widow of the deceased, Ngozi Emereonye, said, “I am a housewife with six children. Where do I start from? His death is a big blow to the family and I cannot recover from it for the rest of my life.”

Meanwhile, a family source, who spoke on the condition of anonymity, lamented that policemen from the state CID had been extorting the family under the guise of investigation.

“The police asked us to pay N120,000 for autopsy. That was after collecting N10,000 for “police photographs”, which is just to take pictures of the deceased in the mortuary,” he said.

The Imo State Police Public Relations Officer, DSP Andrew Enwerem, confirmed the incident, saying the suspect would be taken to court once investigation was completed.

On the alleged extortion, Enwerem said, “The police does not pay for autopsy. Where do you expect the police to get that kind of money from?

“If the family can get any medical doctor that will charge them less than that amount, they should bring the person and the police will work with him. The crime is not bailable, so the suspect will remain in custody until investigation is completed.”