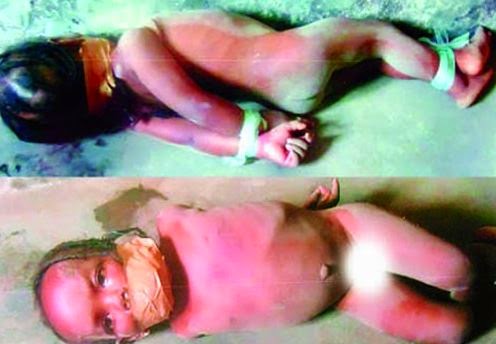 This young girl's stepmother, 28-year-old Christiana Faturoti, allegedly threw her there as a punishment because she soiled herself. After putting the child in the room, she padlocked it and left for her workplace.

For over two hours on February 17, the little girl, who turned two on February 15, 2015, groaned and moaned, until a neighbour heard the sound and traced it to an unoccupied room which was padlocked. After peeping and seeing the girl in such a condition, the neighbour quickly alerted the police at Itori police station. Christiana was promptly arrested and is currently undergoing interrogation at the Anti-Human Trafficking section of the Department of Criminal Investigation, Ogun State Police Command.

Lovelyn’s mother was reported to have developed baby blues (mental illness) after birth and is currently at a psychiatric hospital where she is undergoing treatment. Crime Reports learnt that the child’s father, Mr Christopher William, met Christiana on the facebook, after which they started a relationship.

Willam (37), from Abia State who spoke with Crime Reports, said:

“Christiana posted a notice on facebook that a single lady from Osun State, a mother of one, needed a husband. I called the number and asked that we meet.

“I sent her N5,000 as transport fare to Lagos State and she came in February 2013. She slept in my place and left the following day. We lost contact for about two months. Later, she called me that she was pregnant and I told her to come over to Lagos. We went to my mother in Abia State in June and spent about a week there.

“In October 2013, I told Christiana to move in with me until she would deliver her baby, after which we would go to her family for marriage formalisation. To my surprise, she refused, saying that she had to get the consent of her friend, Dekola Elizabeth. She later called and said her friend disagreed with my suggestion.

“When she put to bed on December 5, 2013 and I was informed, I still repeated my suggestion but she refused. I said we would hold the naming ceremony when the baby would be three months according to my culture but she named the baby herself on the seventh day.

“All these led to a disagreement for a while until I called her for settlement again and I promised to be visiting. In November 2014, she said she wanted to see my daughter. Then my daughter, Lovelyn, was with a care giver whom I was paying N12,000 per month. She suggested that she take the little girl to stay with her along with her son. That was same November.

“I agreed with the idea and she took my daughter.

“Any time I went there, the friend would not allow me to sleep over. She would be looking at her watch, telling me it was time to leave. If I desired to have private discussion with Christiana, she would ask me to say everything in the presence of her friend.

“My daughter was two years old on February 15, so on February 14, I called her that we should celebrate Valentine’s Day together so that the following day, we could mark my daughter’s birthday but she said no, she had a church programme. On February 15, I was at Christiana’s place.

“I noticed that my baby was wearing two dresses. I removed the dresses and saw whip marks on my daughter’s body. I also saw another mark on her face and noticed that her eyes were bloodshot. On enquiries, Christiana said my daughter got the marks from school.

“I called her friend’s attention to it but her response was ‘That is your business’. I made up my mind to go with my daughter but Christiana said she would put her in her own class in school. I gave her N5,000 and said I would be back on Wednesday.

“I was surprised when I received a call on February 17 from Itori police station. When I got there, I was shown my daughter’s picture and I started weeping. I enquiries on what I did to warrant the treatment and I was told she said I loved the girl more than her son.”

Christopher said the lady’s family had been begging her but said his relationship with her was over. “If she could do this to my daughter, it means my life is in danger too.”

“the girl did not offend me but I was not happy at the way Christopher neglected me and the baby I had for him, and concentrated on his daughter.

“I met Christopher on facebook in December 2012. He told me he had a child but was single. I also told him I was a single mother of one. He proposed a relationship and I went to Lagos State to see him. When I got pregnant, I went to his parents in Abia State. On our return, I asked him to accompany me to my parents’ but he said he was not ready to go, telling me to pack into his house. I refused and he stopped coming to me.

“After delivery, I called him and he came with N5,000, diapers and clothes. He did not come for the naming ceremony; I named the child myself.“In September, 2014, he called to apologise and said he would start performing his responsibility. In October, he said his daughter’s care giver had travelled and his relations were using the girl to extort money from him. He said I should get an accommodation for him so that he would move close to me. Christopher started coming regularly and would bring provisions.

“It is true I beat the girl which left marks on her. She soiled herself and I was angry with her. On February 17, she soiled herself again, so I tied her hands and legs, tapered her mouth and threw her inside the room the father paid for, though yet to move in. I padlocked the room and left for my workplace at about 7a.m. I just wanted to punish her.”

When asked to describe her action, Christiana replied: “Wicked”.

“I didn’t know about what Christiana did to Lovelyn. I was not a party to it, though I also beat her once when she soiled herself.

“It is true that Christopher pointed my attention to the marks on the child’s body and said that he wanted to go with her, but I replied that the choice was his because it was none of my business.”