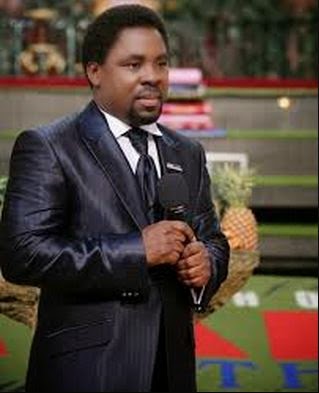 On Sunday 15th March 2015, Prophet T.B. Joshua gave a warning to Nigerians over the upcoming elections, further adding that he foresaw an imminent plane crash within Nigeria.

“Pray for Nigeria because I am seeing a plane crash,” Joshua stated in a service televised live via Christian channel Emmanuel TV. “It’s not a good thing to lose personalities again,” he added, specifying that prayer and fasting should be especially offered from 19th to 23rd.

"The challenge Nigeria is facing – on the day of voting, when you drop your votes in the ballot box, you will know who is PDP and who is APC. It’s a parable; very delicate. Because everybody plays a game; we deceive ourselves. ‘So this man voted for this party but he’s in that party'."

Joshua stated that a dark cloud was hanging over the nation. “The cloud is darker. When it is about to rain, you cannot see in front again,” he vividly described.

The cleric further emphasised that vengeance was nigh for the perpetrators of the building collapse that left 116 dead last year September, insisting it was an attack. “There must be vengeance concerning what happened here. Both the slaves and masters must pay the price.”

He stated he was unhappy due to the innocent blood spilled in his church premises and the refusal of those responsible to admit. “God gave me an order that I should continue this work – so I must do it. Nothing can separate me from the work of God but your prophet is not happy. I will be happy when vengeance comes,” he stated, with a markedly stern countenance.