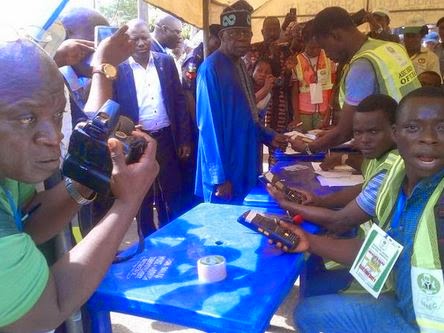 Former Governor of Lagos State, Asiwaju Bola Tinubu, was embarrassed by a thug, Ise Aye, while Tinubu was doing his accreditation at polling unit 047 on Kaffi/Sunday Adigun Street, Alausa, Ikeja.

The thug, who had scars on his face and tattoos all over his body, shouted at the governor and accused him of neglecting some of the youths in the area.

While shouting in Yoruba, he said, “You abandoned us here. The leaders here did not give us money. I know what I have suffered in the hands of the PDP all because I refused to join them. We remained loyal to the APC because of your late mother (Iya Mogaji) that lived here. Anytime I come here looking for money, they refer me to Bourdillon in Ikoyi but no one allows me to enter your mansion.”

Tinubu, who felt insulted by the outburst, described Ise Aye as an untrained young man lacking in wisdom.

He said, “Do you have any sense at all? Is that how you were trained to talk to elders. Get out of here, you are embarrassing me.”

When asked by a reporter why he supported Jonathan instead of Nuhu Ribadu of his party(the defunct Action Congress of Nigeria) in the 2011 elections, Tinubu said, “You must retract that statement. If not, I will assume that you are working for the PDP.

“I never supported Jonathan in 2011. I can never destroy what I used my hands to build.”